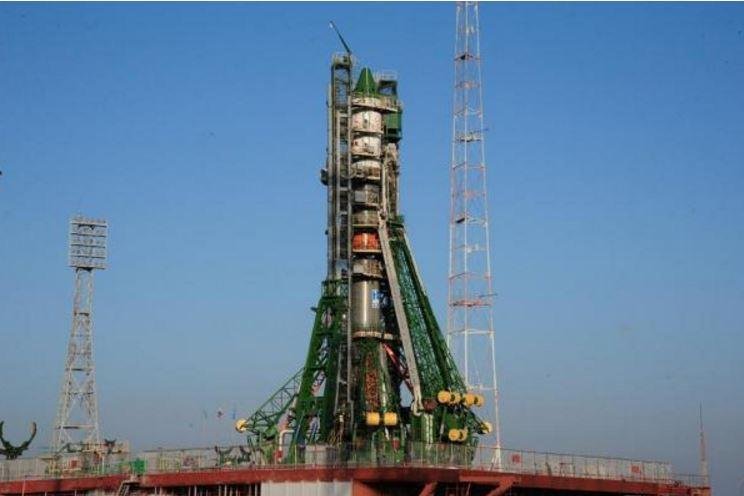 The Russian cargo ship and rocket, Progress 65, prepares for takeoff at the Baikonur Cosmodrome in Kazakhstan. The rocket crashed about six minutes after the launch, and Russia on Saturday grounded all flights of its Proton-M rockets for another 3 1/2 months. Photo by RSC Energia/NASA

Jan. 29 (UPI) -- Russia has grounded all Proton-M rockets for 3 1/2 months because of flaws in the engines, Prime Minister Dmitry Rogozin announced.

Last December, an unmanned Soyuz-U cargo ship carrying supplies for the International Space Station broke up in the atmosphere over Siberia about six minutes after it left the launchpad. Destroyed were 2.6 tons of food, fuel and other supplies.

Some important components in the second and third stages of the rocket may have been switched out by workers during the construction process at a plant in Voronezh, which builds the Proton-M and Soyuz rocket engines, according to a report.

"Instead of using materials containing precious metals .... less heat-resistant components were used, which are normally used for other engine models," says a report published in the Kommersant paper.

On Saturday, Rogozin visited the Voronezh plant and called for an investigation.

Workers had evidently been directed to "switch technology and documentation," Rogozin said.

"All those responsible for switching document and technology would be harshly punished," Rogozin said. "Three Proton-M rockets will be dissembled and their second and third-degree engines replaced."

Last week, the head of the Voronezh factory resigned "for reasons of unsatisfactory work and product quality."

Russia is the only country capable of launching astronauts to the ISS.

World News // 8 hours ago
Israeli airstrike targets tower offices of media outlets
May 15 (UPI) -- Israeli forces launched hundreds of strikes on Gaza on Saturday, including one that destroyed a building containing the offices of multiple news outlets.