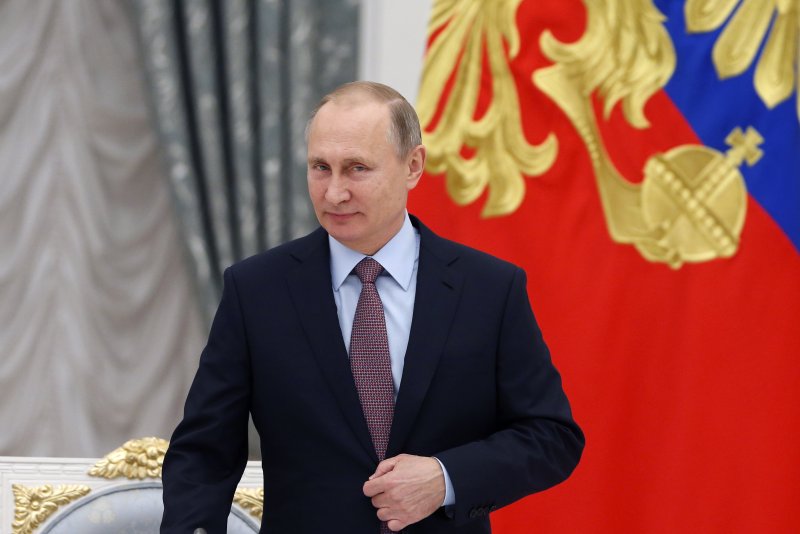 Russian President Vladimir Putin's government arrested four top intelligence officials and charged them with treason. U.S. analysts speculated the treason charges could be in response to Russian cooperation with an investigation by U.S. officials into whether Russia intentionally meddled in the presidential election on behalf of Donald Trump. Photo by Sergei Ilnitsky/EPA

Jan. 28 (UPI) -- The Russian government arrested four men for treason after an investigation that U.S. intelligence officials speculated was in response to their own inquiry about Russia's hacking of the U.S. presidential election.

U.S. officials said they could not be certain whether the arrests are in response to U.S. officials citing with "high confidence" that Russia intentionally interfered with the election to help Donald Trump win. However, for Director of National Intelligence James Clapper to make the proclamation the U.S. government is as close to certain as it can be of Russia's role in hacking Democratic groups and Hillary Clinton's campaign, it likely would require human intelligence in addition to Russia's electronic fingerprints.

If the United States did obtain confirmation about Russian hacking from a mole inside the FSB, it would have had to been a source high up in the power structure because knowledge of such an operation would likely not have spread beyond the senior-most officials there.

U.S. analysts cautioned it was also possible the FSB was using the existence of a potential leak to the United States as cover to purge itself of members involved in an internal power struggle.

Though the reason for the arrests remains unclear, one thing appears certain: The Russian government wanted news of the charges to become public. As opposed to handling the matter internally, the arrests were reported almost simultaneously by multiple Russian media outlets on Thursday.

Russian officials went so far as to arrest one of the suspects, Sergei Mikhailov, a deputy director of the Center for Information Security, in a scene that could have been torn out of a spy novel. They barged into a meeting between senior intelligence officials, put a bag over Mikhailov's head and hauled him out of the room, according to multiple accounts in the Russian media.

The arrests are believed to have taken place in early December, just days after the U.S. intelligence report was published.

Analysts told The New York Times there could be several reasons the Kremlin would want the information public. If the arrests are indeed tied to the U.S. intelligence report, it would be a tacit acknowledgment Russia successfully meddled in a U.S. presidential election -- a way to take credit and show other foreign governments the Kremlin has the ability to do so again. Analysts also speculated a public treason trial could serve as a venue to air more potentially damaging information gleaned about the United States -- and new President Donald Trump -- without using back channels such as the website WikiLeaks to make it public.

World News // 2 hours ago
1 in 5 experience workplace violence worldwide
Dec. 5 (UPI) -- A first-ever global survey of workplace harassment and violence found at least one in five people experience some form of violence at work.

World News // 13 hours ago
No shortage of bullish factors for crude oil
Dec. 5 (UPI) -- From a price cap to limits on Russian oil, crude oil prices will remain under the influence of a variety of global factors this week.