Search for MH370 ends with no plane, few answers of what happened

The search has continued for three years and covered thousands of miles of ocean but failed to turn up the Malaysia Airlines jetliner. 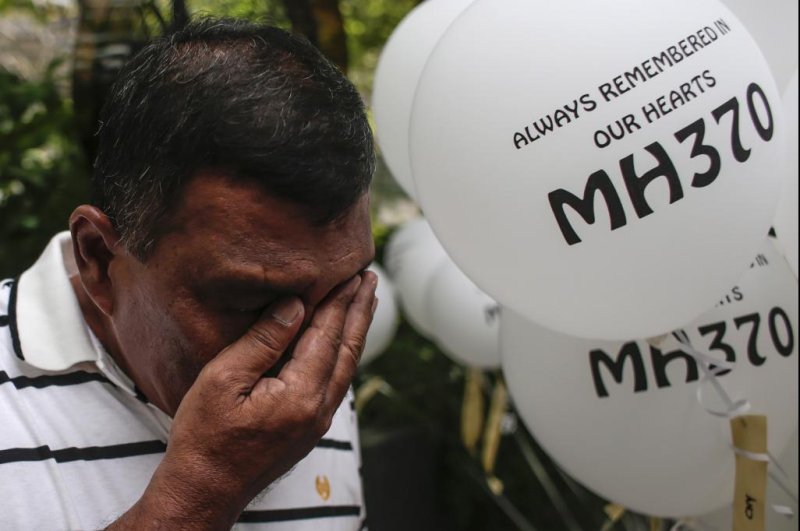 Transport ministers in Australia, China and Malaysia announced Monday morning the search operation for Malaysia Airlines flight 370 would be suspended after no new evidence was found in a nearly 50,000-square-mile area of the Indian Ocean thought to be where the plane crashed in 2014. Mohd Razahan, pictured, cries during a remembrance ceremony in Kuala Lumpur, Malaysia, on March 6, 2016, two years after the flight disappeared from air traffic controller's radar screens. Photo by Fazry Ismail/European Pressphoto Agency

KUALA LUMPUR, Malaysia, Jan. 17 (UPI) -- Officials on Monday suspended the search for Malaysia Airlines Flight 370 after three years of searching for the airplane thought to have gone down somewhere over the Indian Ocean.

Officials in Australia, China and Malaysia announced in a joint statement that the last search vessel has left the Southern Indian Ocean and the underwater search there for the plane was being suspended because nothing has been found and there are no new leads.

The three countries decided to suspend the search after it covered a roughly 46,000-square-mile area in the Indian Ocean where the plane is believed to have gone down, though no explanation for why it crashed there -- nor evidence the area is where it actually crashed -- has presented itself.

"Despite every effort using the best science available, cutting-edge technology, as well as modelling and advice from highly skilled professionals who are the best in their field, unfortunately, the search has not been able to locate the aircraft," transport ministers from Australia, China and Malaysia said in the joint statement. "Accordingly, the underwater search for MH370 has been suspended."

The plane left its expected flight route from Kuala Lumpur to China with 239 people on board in March 2014, taking a hard turn in the opposite direction and spending six hours over the Indian Ocean before officials believe it crashed somewhere into the water.

In July 2016, after more than two years of searching, officials narrowed down the search to a 46,000-square-mile area based on evidence from the pilot's personal home simulator tracking a path there.

The officials said at the time, however, that if the plane was not found in the massive area of ocean, the search would be suspended.

The search, which has been difficult from the start, combined scientific studies of how and where the doomed flight dropped out of the sky, or was intentionally flown, into the Indian Ocean.

The officials say they are hopeful new information comes to light to help find the aircraft, but say that even with the assistance of nations around the world, beyond the three heading the investigation, they have been unable to locate the plane.

For family members of those aboard the flight, the end of the search -- even in the absence of new evidence as to where it is -- comes as unwelcome news.

"They said they are quite sure that they are searching the right place, but it seems that they are wrong," Steve Wang, whose mother was on the flight, told CNN. "I think it is their responsibility, not only for the 239 passengers on the plane, or for the next of kin like us, but also they have to give an answer to the whole world... what really happened to MH370."

At least 30 killed in Turkish Airlines crash in Kyrgyzstan Investigators: EgyptAir fire, crash may have been caused by overheating cellphone

World News // 20 hours ago
New gas pipeline begins full service to Europe
Nov. 30 (UPI) -- Most of the capacity on the Baltic Pipe is already booked for the next 15 years, operators said.

World News // 21 hours ago
Eurozone inflation eases to 10%, first decline in 17 months
Nov. 30 (UPI) -- Inflation in the eurozone dropped for the first time in 17 months in a needed breather for consumers on the continent despite it still rising double digits at 10% in November, according to European Union's Eurostat.