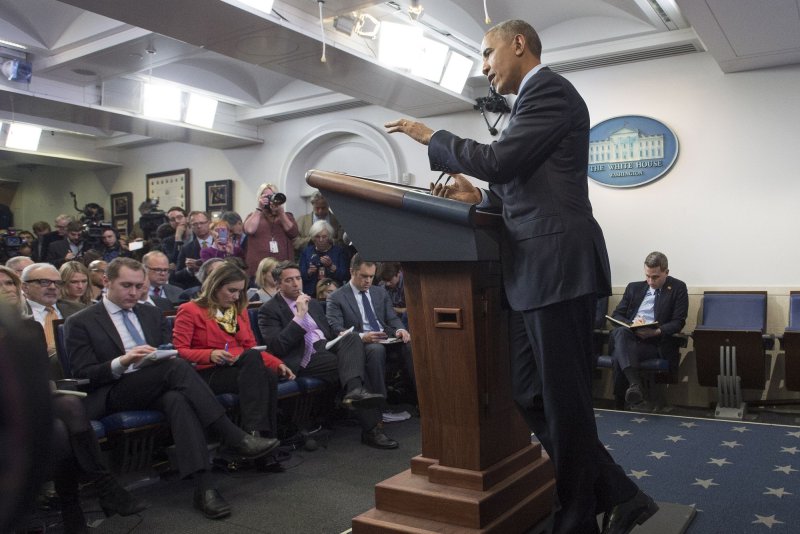 President Barack Obama discusses Russia's alleged hacking to influence the U.S. election during his year-end news conference conference at the White House in Washington, D.C. on December 16. On Thursday, he announced punishment against Russia, including the expulsion of diplomats. Photo by Kevin Dietsch/UPI | License Photo

WASHINGTON, Dec. 29 (UPI) -- The Obama administration announced Thursday the expulsion of 35 Russian diplomats and new sanctions as punishment for meddling in the U.S. presidential election.

The White House and the Treasury Department announced sanctions against Russia's main intelligence organizations -- the Federal Security Service, which is the main successor to the KGB, and the GRU, Russia's military intelligence operation.

Also sanctioned were three companies that allegedly provided material support to the GRU, four officers of the GRU and two Russian individuals for "cyber-enabled activities."

"Russia's cyberactivities were intended to influence the election, erode faith in U.S. democratic institutions, sow doubt about the integrity of our electoral process and undermine confidence in the institutions of the U.S. government," the joint statement said. "These actions are unacceptable and will not be tolerated."

President Barack Obama said, "All Americans should be alarmed by Russia's actions."

Two Russian compounds in Maryland and New York allegedly used by Russia for intelligence were ordered closed. The 35 Russian diplomats and their families have been ordered to leave the country within 72 hours. Those officials, who the government said are intelligence operatives, were ejected instead in response to harassment of American diplomats in Russia.

"Moreover, our diplomats have experienced an unacceptable level of harassment in Moscow by Russian security services and police over the last year," Obama said. "Such activities have consequences."

Vladimir Dzhabarov, deputy chairman of the foreign policy committee in the upper house of Russian parliament, told TASS that Russia would respond to the penalties.

"You realize, of course, reciprocal steps will be made and the U.S. embassy in Moscow and, quite possibly, the consulates will be cut down to size as well," he said.

Obama modified a 2015 executive order to levy sanctions against foreign officials who carry out cyberattacks against the United States. The original order allows the Treasury Department to freeze assets of individuals or entities that digitally damage U.S. infrastructure or engage in economic espionage. But officials earlier determined the order does not cover the election hacking.

"These actions are not the sum total of our response to Russia's aggressive activities," Obama said. "We will continue to take a variety of actions at a time and place of our choosing, some of which will not be publicized."

Also Thursday, the Department of Homeland Security and FBI issued a 13-page joint report, which says the "public attribution" to Russia of "malicious cyber activity" related to the election is "supported by technical indicators from the U.S. Intelligence Community, DHS, FBI, the private sector, and other entities."

The report refers to the Russian hacking campaign as "Grizzly Steppe" and says it "part of an ongoing campaign of cyber -enabled operations directed at the U.S. government and its citizens."

It identifies two groups already named by CrowdStrike and other private security firms -- APT 29 and APT 28 -- that it says hacked into the systems of "a political party."

The report says that both are "RIS" (Russian civilian and military intelligence services) actors.

Julian Assange, the founder of WikiLeaks, said earlier this month that the DNC emails and Podesta emails that were released did not come from the Russian government.

"Our source is not the Russian government," Assange said on "The Sean Hannity Show," adding that WikiLeaks normally makes no comment on sources, but that he had chosen to do so in this case, because of the accusations concerning Russia and attacks on Wikileaks.

"Stop trying to distract in that way and pay attention to the content of the publication," he said.

In October, the intelligence community blamed Russia for interfering in the U.S. election. Sources later said the CIA was certain Russian President Vladimir Putin approved the hacking. Putin has denied any involvement in the hacks.

It will be up to President-elect Donald Trump whether to lift the sanctions when he takes office on Jan. 20. Members of Congress, including some prominent Republicans, have called for an investigation into Russia's actions.

Trump has called the CIA's assessment that Russia had anything to do with the hacking of the Democratic National Committee and emails of Democratic Party officials, including Hillary Clinton's campaign chairman, John Podesta "ridiculous".

On Thursday, he said in a statement: "It's time for our country to move on to bigger and better things. Nevertheless, in the interest of our country and its great people, I will meet with leaders of the intelligence community next week in order to be updated on the facts of this situation."

"While today's action by the administration is overdue, it is an appropriate way to end eight years of failed policy with Russia. And it serves as a prime example of this administration's ineffective foreign policy that has left America weaker in the eyes of the world," the Republican from Wisconsin said in a statement.

He added: "Russia does not share America's interests. In fact, it has consistently sought to undermine them, sowing dangerous instability around the world."

Putin: U.S. Democrats must 'learn how to lose gracefully'

World News // 10 hours ago
Lavrov says Russia was forced to invade Ukraine
Sept. 24 (UPI) -- Russian Foreign Minister Sergey Lavrov told the United Nations Saturday that Russia had no choice but to invade Ukraine because of the "inability" of Western countries to negotiate.

World News // 19 hours ago
South Korea on alert after detecting signs of possible submarine missile launch
Sept. 24 (UPI) -- South Korean military and political officials said Saturday they are on alert for the possible firing of a submarine-launched ballistic missile by North Korea.