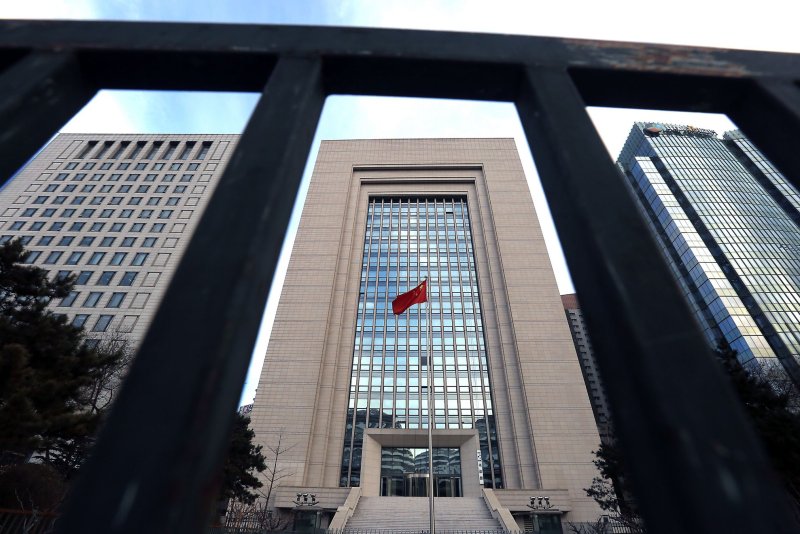 China's national flag flies outside China's Foreign Ministry and a military headquarters in Beijing on Sunday. Beijing expressed serious concern Monday over U.S. President-elect Donald Trump’s suggestion the U.S. does not need to stick to the dedades-long One China policy, saying it has a bearing on China's sovereignty. Photo by Stephen Shaver/UPI | License Photo

In an interview with Chris Wallace on Fox News' Sunday, Trump questioned why the United States should retain the decades-long policy.

"I fully understand the One China policy," he said. "But I don't know why we have to be bound by a One China policy unless we make a deal with China having to do with other things, including trade."

Chinese Foreign Ministry spokesman Geng Shuang told reporters during a scheduled briefing: "We are seriously concerned about it. The Taiwan question has a bearing on China's sovereignty and territorial integrity and is one of China's core interests."

RELATED Trump: 'Nobody really knows' if climate change is real but he's 'open-minded'

The spokesman's comments also came after after the Communist Party-owned paper, Global Times, published an opinion piece with the headline: "Trump, please listen clearly, the One China policy cannot be traded." In its article, it warned Trump that China cannot "be easily bullied." The newspaper also wrote: "If Trump abandons the one-China principle, why should China need to be U.S.' partner in most international affairs?"

The United States established diplomatic relations with communist China in 1979 by rescinding diplomatic recognition of the nationalist government of China, which had fled to Taiwan during the Chinese Civil War and set up a government there under the leadership of Chiang Kai-shek.

Trump broke diplomatic protocol regarding Taiwan when he accepted a call by Taiwanese President Tsai Ing-wen on Dec. 2.

China's Foreign Ministry lodged a diplomatic complaint with the United States about Trump's 10-minute call -- the first by a U.S. head of state with a Taiwanese leader since 1979. But China's response was tempered. Chinese foreign Minister Wang Yi blamed Taipei instead for Trump's call and attributed it to lack of experience.

"China is trying to play the long game with Trump, not trying to rise to the bait [and] not trying to be provoked into a war of words in this unusual pre-inauguration period," Control Risks' CEO Richard Fenning told CNBC's Squawk Box.

Trump responded on Twitter that it is "interesting how the U.S. sells Taiwan billions of dollars of military equipment but I should not accept a congratulatory call."

Trump has argued the U.S. trade policy with China is unfair.

"We're being hurt very badly by China with devaluation, with taxing us heavy at the borders when we don't tax them, with building a massive fortress in the middle of the South China Sea, which they shouldn't be doing, and frankly with not helping us at all with North Korea," Trump said in the Fox interview. "You have North Korea. You have nuclear weapons and China could solve that problem and they're not helping us at all."

"China is more likely to let the whole relationship with the United States deteriorate in order to show its resolve on the Taiwan issue," Jessica Chen Weiss, an associate professor of government at Cornell University and an expert in Chinese nationalism, told CNBC.

World News // 59 minutes ago
North Korea acquires Russian pedigree horses, Moscow says
April 8 (UPI) -- North Korea may have purchased as many as 30 pedigree horses from Russia, and the order may have come directly from Kim Jong Un, according to recent reports.