"It is time he go and we thank him for everything he has done for the country," Gambian President-elect Adama Barrow countered Friday. 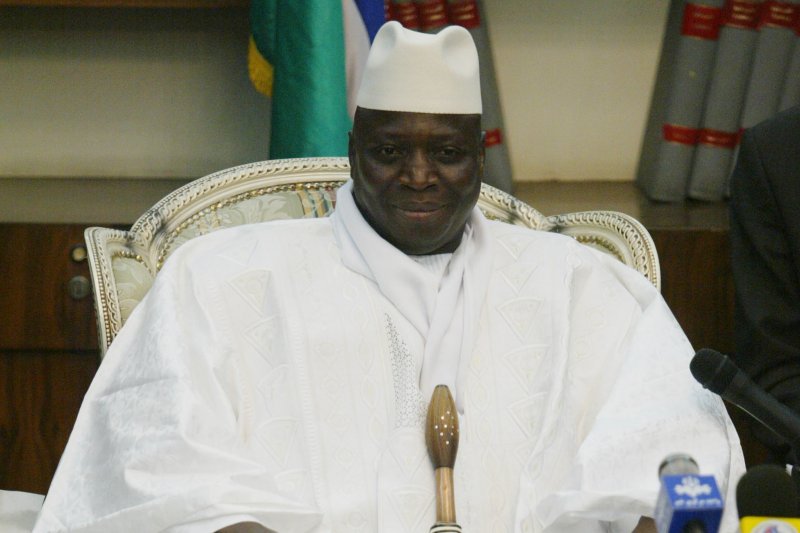 Gambia's President Yahya Jammeh on Friday said he rejects the result of the country's presidential election earlier this month, in which he lost to challenger Adama Barrow after 22 years in power. File Photo by Mohammad Kheirkhah/UPI | License Photo

The recently-defeated premier said on state television Friday that he rejects the result of the presidential election -- citing "unacceptable abnormalities" -- and demanded a fresh vote.

"After a thorough investigation, I have decided to reject the outcome of the recent election," he said. "I lament serious and unacceptable abnormalities which have reportedly transpired during the electoral process.

"I recommend fresh and transparent elections which will be officiated by a god-fearing and independent electoral commission."

Jammeh lost to challenger Adama Barrow on Dec. 1 by winning less than 40 percent of the vote. Barrow was supported by more than 45 percent of voters, many of whom are itching for new leadership after more than two decades of Jammeh's rule.

"I have been declared the winner and the incumbent President Jammeh has congratulated me, which I think is a move in the right direction," Barrow told Gambia's Daily Observer Friday.

"We have to be patient because nothing will come easy and nothing is automatic," he added. "We are ready and we will work round the clock to make a difference but we are calling on every Gambians to put hands on deck. It is through hard work that we can achieve a better Gambia."

Jammeh, 51, took power in Gambia during a 1994 military coup and has presided over a government that has regularly drawn international criticism over a spate of issues -- including human rights abuses and systemic oppression.

The president has also been condemned for his advocacy for violence against the Gambian gay community. He said last year, "If you do it (homosexuality) I will slit your throat. If you are a man and want to marry another man in this country and we catch you, no one will ever set eyes on you again."

Barrow, 51, is scheduled to assume office next month.

Jammeh initially accepted the election defeat and was expected to concede. Friday's remarks, though, indicate he won't easily release his grip on the presidency.

"We should all put personal issues aside and Gambia is the most important thing, which I think President Jammeh has demonstrated," Barrwo said. "He has been here for 22 years working for Gambia and we have to commend him for that, but it is time he go and we thank him for everything he has done for the country."

World News // 12 hours ago
Turkey blocks NATO talks on Finland, Sweden applications
May 18 (UPI) -- Turkey on Wednesday immediately blocked the beginning of NATO accession talks for Finland and Sweden right after they submitted their applications to join the alliance.

World News // 1 hour ago
French government to appeal city's move to allow burqinis at public pools
May 18 (UPI) -- One day after lawmakers in Grenoble, France voted to allow Muslim women to wear burqini swimsuits at state-run swimming pools, the French government said Wednesday it will appeal the decision.

World News // 4 hours ago
British MP out on bail after rape, sexual assault allegation
May 18 (UPI) -- An unnamed British Parliament member accused of rape has been released on bail, Metropolitan Police confirmed Wednesday.

World News // 4 hours ago
At least 12 dead, several hurt after wall collapses at India salt factory
May 18 (UPI) -- A wall collapsed at a salt factory in western India on Wednesday, killing at least a dozen workers there and injuring several others, officials said.

World News // 6 hours ago
Russian soldier enters guilty plea in Ukrainian war crime trial
May 18 (UPI) -- A 21-year-old Russian soldier faces life in prison after he entered a guilty plea to killing an unarmed civilian during Russia's invasion of the country in the first war crimes trial of the war.

World News // 6 hours ago
U.N. global climate report shows severe impact on food security
May 18 (UPI) -- Climate change continued to heat up the Earth in 2021 as concentrations of greenhouse gases increased, sea ice mass shrank and ocean levels rose, according to a new report from the World Meteorological Organization.

World News // 7 hours ago
Russia says most Ukrainian troops surrender after weeks holed up at Mariupol plant
May 18 (UPI) -- Russia's military said on Wednesday that hundreds of Ukrainian troops who have been holed up for weeks at the steel plant in Mariupol have surrendered and been taken into custody.

World News // 8 hours ago
Inflation rises in Britain by 9%; steepest surge in 40 years
May 18 (UPI) -- Like the United States, Britain is dealing with its highest Inflation in about 40 years -- due largely to rising energy prices that are being disrupted by Russia's war in Ukraine.
Advertisement