Troops were training with artillery, according to state media on Friday.

According to state-controlled television network KCTV, Kim suggested Seoul must be taught a lesson.

The training exercise was held near a disputed maritime border in the Yellow Sea, and close to the South Korean island of Yeonpyeong, which North Korea shelled in 2010, resulting in four South Korean casualties.

Kim stayed to watch the drills that included the rapid firing of artillery after being briefed on the training plan, according to the report.

North Korea state media described an island targeted for training was filled with loud explosions and light and likened the spectacle to a "delightful moment" that simulated the sight of "the enemy's cities and military targets submerged in a sea of fire."

Kim described the explosions as a "fascinating sight" and asked that the North Korean troops that would advance South be "given wings" by the artillery units.

Pyongyang has previously defended the bombardment of the South Korean island and warned of another "brutal baptism of fire" in November.

RELATED More than 30 percent of North Koreans use meth, opium

World News // 14 hours ago
Saudi-led coalition launches airstrikes on Yemen after deadly Dhabi airport attack
Jan. 17 (UPI) -- The Saudi-led coalition said late Monday it retaliated against the Houthi militia in Yemen after the rebels claimed responsibility for a rare drone attack that caused three oil tankers to explode in the UAE. 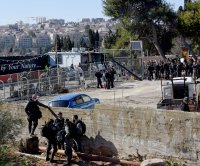 World News // 11 hours ago
Amazon reverses decision to stop accepting Visa cards in Britain
Jan. 17 (UPI) -- Amazon and Visa appear to have reached an agreement for Visa cards to be accepted on Amazon's British platform after the retail giant previously threatened to stop taking them by this week.
Advertisement