Water supply cut off to 40% of Mosul's residents 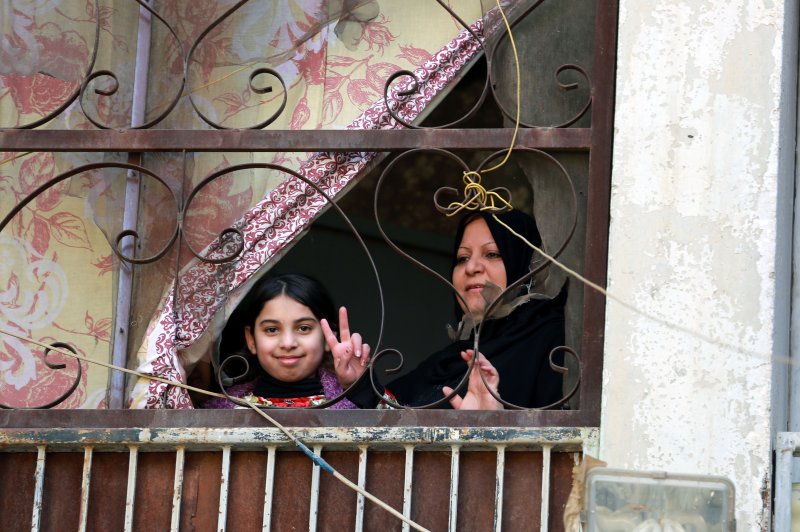 An Iraqi woman with her daughter look through a window Sunday as Iraqi special forces take up position in the recaptured district of Shoqaq Khadraa, eastern Mosul. Water was cut to about 650,000 people when a pipeline was hit during fighting between Islamic State and Iraqi government forces in eastern Mosul. Photo by Ahmed Jalil/European Pressphoto Agency

MOSUL, Iraq, Nov. 30 (UPI) -- About 40 percent of the residents of Mosul, Iraq -- around 650,000 people -- are without water after a pipeline was hit during fighting between the Islamic State and Iraqi government forces, authorities said Wednesday.

"We are facing a humanitarian catastrophe," said Hussam al-Abar, member of Mosul's Nineveh provincial council, said to the media. "Basic services such as water, electricity, health, food are non-existent."

The pipeline was one of three that serve eastern Mosul. Repairs can't be made quickly because it is in an area held by Islamic State fighters.

About 1.5 million people remain in the city despite fighting the past six weeks. About 40 percent of the eastern half of the city has been retaken from the Islamic State since the start of the offensive.

About 74,000 civilians have fled Mosul since the fighting and the United Nations is bracing for more than a million homeless people.

"Children and their families in Mosul are facing a horrific situation," said Peter Hawkins, Unicef representative in Iraq. "Not only are they in danger of getting killed or injured in the cross fire, now potentially more than half a million people do not have safe water to drink."

Some water is being trucked from 22 miles away.

Without clean water in the next days, Unicef says in a release "civilians will be forced to resort to unsafe water sources, exposing children to the risk of waterborne diseases such as severe diarrhea and the threat of malnutrition. Children in affected areas are already strained from years of extremely harsh living conditions."

Unicef is asking the government to reactivate nearby boreholes and water treatment plants.

"Unicef urges all parties to the conflict to allow these critical deliveries and repairs. Civilian infrastructure must never be attacked," Hawkins said.

World News // 13 hours ago
Airstrikes in Yemen leave dozens dead, nationwide Internet outage
Jan. 21 (UPI) -- More than 70 people were killed and hundreds of others injured during Saudi-led airstrikes in northern Yemen, according to officials on Friday.

World News // 13 hours ago
Hezbollah faces rising dissent, efforts to end Iran's 'occupation' of Lebanon
BEIRUT, Lebanon, Jan. 21 (UPI) -- Lebanon's financial collapse, which has pushed many into poverty, has also seen growing anger against Hezbollah, with more voices openly blaming it for the ongoing crisis and for its allegiance to Iran.

World News // 20 hours ago
Only commitment in U.S., Russia meeting about Ukraine is to keep talking
Jan. 21 (UPI) -- Secretary of State Antony Blinken and Russian Foreign Minister Sergey Lavrov ended a 90-minute meeting in Geneva Friday without an agreement on concerns over Ukraine but committed to continue talking.