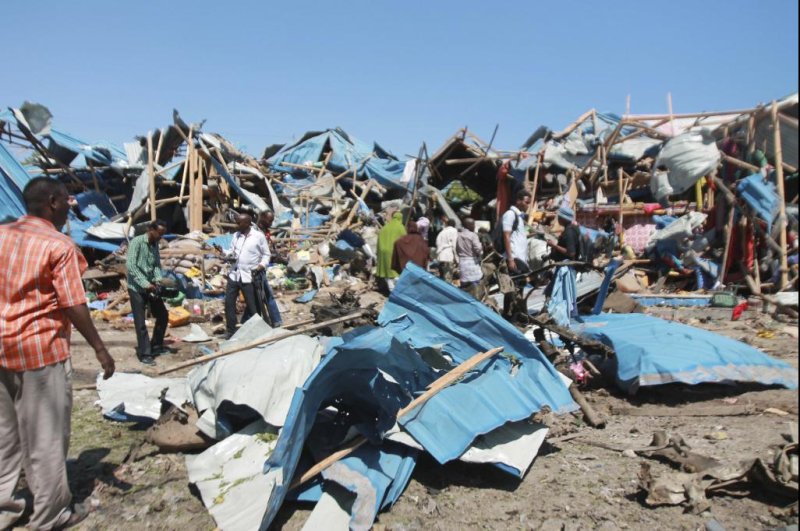 People gather at the scene of a car bomb attack at a busy market in the capital Mogadishu, Somalia, on Saturday. A car carrying explosives was detonated next to a police checkpoint adjacent to the market, killing at least 11 people and injuring many others. No one has claimed responsibility for the attack but the country's Islamist militant group al-Shabab often carries out similar attacks in Mogadishu. Photo by Said Yusuf Warsame/European Press Agency

MOGADISHU, Somalia, Nov. 26 (UPI) -- A car bomb exploded in the Somali capital on Saturday killing 11 people in a crowded marketplace and injuring at least 16 more.

Officials said the number of deaths could still rise as more people are accounted for.

No group has come forward to claim responsibility for the attack, but the al-Qaida-linked terrorist group al-Shabab has launched a string of similar attacks in the country of late. Al-Shabab previously controlled large swaths of Somalia before an African Union peacekeeping force helped restore a functioning government in 2011.

More than 22,000 African Union peacekeepers remain in the country, a source of contention with the militants.

While the group has been forced underground, it has launched several terrorist attacks, including a similar car bomb in August that detonated in Mogadishu, killing 15 at a popular hotel. Another car bomb exploded at a security checkpoint near the Somali Parliament earlier this month, killing three.

The explosion came as Somalia holds its first limited parliamentary elections in four years. International groups have restricted the first round of voting to 14,000 people, limiting participation due to security concerns for polling locations if the whole country were to vote. Those elections will produce a legislature whose members will select a president.

The election was supposed to conclude by the end of November, but officials conceded it was likely to stretch into December due to delays.

World News // 5 minutes ago
U.N. adopts resolution to fight Holocaust denial
Jan. 21 (UPI) -- The United Nations General Assembly has adopted a resolution proposed by both Israel and Germany to combat the denial of the Holocaust.

World News // 7 hours ago
Dozens dead after stampede at Liberian church
Jan. 20 (UPI) -- More than 25 people were killed in Liberia after a stampede during a Christian ceremony in the capital, authorities said.

World News // 12 hours ago
Canada's Prince Andrew High School moves to adopt a new name
Jan. 20 (UPI) -- In an attempt to distance itself from the controversy surrounding the Duke of York, a Canadian high school named after Prince Andrew plans to change its name.

World News // 12 hours ago
United States hit 4 Ukrainians with sanctions for helping Russia
Jan. 20 (UPI) -- The White House announced sanctions Thursday on four current and former members of the Ukrainian government who it says have stoked Russian influence in the country.