Colombian security teams on Thursday rescued Benny Cornelio Osorio Mejía, center, a judge from the United States who was kidnapped while on vacation in Cartagena, from "common criminals," officials said. Photo courtesy of GAULA Policia

CARTAGENA, Colombia, Nov. 18 (UPI) -- Benny Cornelio Osorio Mejía, a judge from the United States who was kidnapped while on vacation in Cartagena, has been rescued by Colombian security teams, Colombian Attorney General Néstor Humberto Martínez said.

The kidnappers, who took the U.S. judge last Friday, demanded a $33,000 ransom for Osorio Mejía's release.

He was rescued in Cartagena's Daniel Lemetre neighborhood during an operation led by the National Department of Sections and Citizen Security with the support of Colombia's GAULA anti-terrorism unit.

Four people -- identified by officials as "common criminals" -- were arrested and several weapons were seized during the security operation.

World News // 5 hours ago
COVID-19 subsides in Britain with 82 new deaths, lockdown to ease
March 7 (UPI) -- The pandemic is diminishing in Britain, including an increase of 82 deaths Sunday, after a peak of more than 1,800 two months ago with restrictions to be reduced and vaccinations ramped up, much like elsewhere in Europe.

World News // 6 hours ago
Pope urges forgiveness where Islamic State ravaged churches
March 7 (UPI) -- Pope Francis urged Christians in Iraq to be open to forgiveness as he delivered a speech at the site of churches ravaged by the Islamic state on the final day of his trip to the nation. 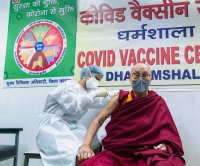