Russia and Armenia to create joint defense force in Caucasus

By Nikolai Litovkin, Russia Beyond the Headlines 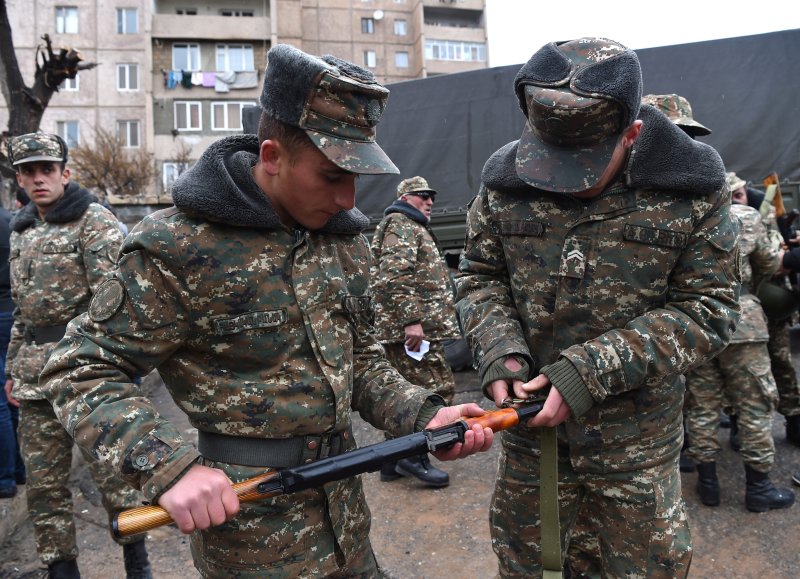 Armenian volunteers receive uniforms and weapons at a military commissariat to join the self-defense army of Nagorno-Karabakh in Yerevan, Armenia, on April 3. Under the new agreement with Russia, Nagorno-Karabakh will be defended only by the Armenian armed forces. Photo by Hayk Baghdasaryan/European Press Agency/Photolure

Russian President Vladimir Putin has approved a proposal by the Russian government to establish a joint group of Russian and Armenian forces in the Caucasus region to deal with potential attacks on either country.

Following Putin's approval on Monday, the Russian Defense Ministry, together with the Russian Foreign Ministry, are to hold a series of talks with their Armenian colleagues and, when the work is finished, sign an agreement on behalf of the Russian Federation.

During the work, the military and diplomats are also allowed to make the necessary adjustments to the project with the consent of the two governments.

The alliance is being established to ensure the security of Russia and Armenia in the Caucasus.

Under the agreement, servicemen of the Russian Federation and Armenia commit themselves to repelling any armed attack against each of the parties, as well as suppressing any attempts at illegal entry across the borders of the two countries.

In peacetime, the group of forces in the Caucasus region will be commanded by the General Staff of Armenia. However, in any period of hostilities, all the leadership in this area will be transferred to the Command of Russia's Southern Military District, stationed in Rostov-on-Don (670 miles south of Moscow).

"From now on, the General Staff of Armenia has the ultimate authority to plan joint activities in the region: exercises, command and staff trainings, and so on," Pavel Zolotarev, military analyst and deputy director of the Institute for U.S. and Canadian Studies at the Russian Academy of Sciences, told RBTH.

At the same time, according to the expert, this agreement allows both Moscow and Yerevan to pursue their independent policies, where there is no pressure "from above" on one of the countries.

"The most important thing is that a 'common defense space' between the two countries will be created now," Dmitry Safonov, military columnist for the Russian daily newspaper Izvestiya, said in an interview with RBTH.

"In addition to the development of joint plans for training and combat use of troops, Armenia will be able to buy Russian weapons at domestic prices, rather than as a foreign customer," said Safonov.

As he stressed, in case of an attack on Armenia, the entire army of the Southern Military District (the forces of the Black Sea Fleet and the Caspian Flotilla, ground forces, the air force, etc.) will join in the defense of its territory.

The agreement is for the term of five years with an automatic extension option if neither of the parties wishes to terminate the cooperation. A similar agreement is already in force between Russia and Belarus.

According to Zolotarev, the draft project for the joint group of forces says nothing about the establishment of a military alliance modeled on NATO.

"Such an alliance implies a joint military budget, military policy, etc. The joint group of forces, in turn, comes down to an improvement in the cohesion of the two armies during fighting," he told RBTH.

The question is what implications the new agreement would have for a potential attack by Azerbaijan on the disputed territory of Nagorno-Karabakh, a breakaway region that is effectively a protectorate of Armenia but which is internationally recognized as Azerbaijani territory. Conflict sporadically erupts along the border the "republic" shares with Azerbaijan, most recently in January-February 2016.

This state is formally recognized neither by Moscow or Yerevan. At the same time, according to Safonov, the constitution of Armenia states that it is responsible for the security of Nagorno-Karabakh.

"Russia abstracts itself from this conflict," said Zolotarev. "Under the new agreement, our troops cannot be used in the fighting in this area. Nagorno-Karabakh will be defended only by the Armenian armed forces."

The town of Gyumri, 80 miles north of the Armenian capital, hosts a Russian army base where around 5,000 troops are stationed.

The base consists of three mechanized infantry, one artillery and one anti-aircraft missile regiment. Units of fourth-generation MiG-29 fighter jets are also deployed in the region.

Russia, Armenia to set up joint air defense system in the Caucasus

World News // 9 hours ago
Blasts at Crimea airfield take out Russian planes; deadly rocket fire in east Ukraine
Aug. 11 (UPI) -- Several Russian warplanes have been destroyed in dramatic explosions at a base in Crimea, the part of Ukraine that was annexed by Russia eight years ago, according to satellite imagery.

World News // 1 day ago
London offers all children polio boosters after more virus found in city sewers
Aug. 10 (UPI) -- Health officials in London are offering polio vaccine boosters to all children between the ages of one and nine after more polio virus was found in the city's sewers.

World News // 1 day ago
Speaker Nancy Pelosi: 'We will not allow China to isolate Taiwan'
Aug. 10 (UPI) -- U.S. House Speaker Nancy Pelosi, D-Calif., said during a Capitol press conference Wednesday that she went to Taiwan during her Asian-Pacific trip to "salute a thriving democracy."

World News // 1 day ago
French rescuers euthanize Begula whale stuck in river
Aug. 10 (UPI) -- An 1,800-pound Begula whale that got stuck in France's Seine River for more than a week earlier this month has died while being moved back out to sea, officials said Tuesday.

World News // 1 day ago
French wildfire reignites, forcing thousands to evacuate as 16 homes were destroyed
Aug. 10 (UPI) -- A massive wildfire that reignited in southwest France has forced the evacuation of more than 6,000 people. The fire in the Gironde region burned another 14,826 acres Wednesday.
Advertisement