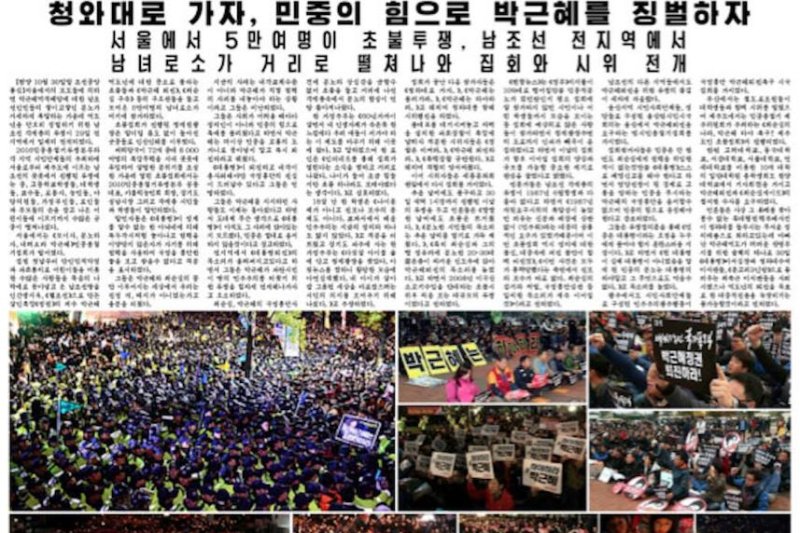 SEOUL, Nov. 7 (UPI) -- In a rare move for Pyongyang, North Korea state media is taking an unusual interest in the South Korean protests that have grown since President Park Geun-hye acknowledged her connections to a woman who may have had access to state secrets and faces allegations of corruption.

In Monday's issue of Workers' Party newspaper Rodong Sinmun, North Korea called for the overthrow of the "Park Geun-hye regime" and the removal of "corrupt power."

The article included color photographs of the candlelight vigils that were held in Seoul over the weekend, when tens of thousands of citizens poured into the streets, demanding the president's resignation, although similar protests against the state are outlawed in North Korea.

The five-page piece in the North Korean newspaper reported protests were held in Seoul, as well as other major cities in the South: Gwangju, Gyeongju, Daejeon, Busan and on Jeju Island.

"About 200,000 people, men and women of all ages, crowded into Gwanghwamun Square of Seoul as well as around the Sejong Cultural Center, forming a mass formation, with their hearts burning with the single resolve to bring Park Geun-hye to justice," the article read.

Pyongyang also referred to the police dispatched in Seoul as "fascist" and stated they formed a wall against the protesters.

The president is still experiencing low approval ratings. Yonhap reported on Monday a local poll shows her rating is now at 11.5 percent, which is higher than a Gallup Korea poll that showed her rating fell to 5 percent.

Park has regained some approval among South Korean conservatives since her second apology on Friday.