Egypt's former President Mohamed Morsi sits in the defendent's cage during his trial at a court in the capital, Cairo, Egypt, on April 21, 2015. Saturday, an Egyptian appeals court upheld his conviction and 20-year sentence. Photo by Karem Ahmed/UPI | License Photo

The decision by the Court of Cassation, Egypt's highest appellate court, is final and cannot be further appealed, but it can be overturned by a presidential pardon. The court also upheld verdicts against eight co-defendants, including seven who received the same sentence.

Morsi was sentenced in April 2015 for inciting violence against protesters who had staged a sit-in outside the presidential palace in 2012. A total of 11 people, including eight Morsi supporters, were killed in the clash. Other defendants in the case included Asad al-Shikha, Morsi's former deputy chief of staff; Ahmed Abdel Atty, the former head of the president's office; and Mohamed El-Beltagy, a leading member of the Muslim Brotherhood.

Morsi was ousted from office by the military in 2013, after one year in office. Morsi is also appealing a death sentence handed down following the violent Arab Spring uprising that began in 2010. Morsi said all the charges against him are politically motivated.

World News // 2 minutes ago
Blinken pledges U.S. support in Ukraine, vows 'consequences' for Russian aggression
Jan. 19 (UPI) -- During his visit to Ukraine on Wednesday, U.S. Secretary of State Antony Blinken assured the Eastern European country that it has U.S. support and urged Western nations to unite against Russian aggression.

World News // 47 minutes ago
Hong Kong experts defend decision to euthanize hamsters, other animals with COVID-19
Jan. 19 (UPI) -- Despite opposition and outrage from animal lovers and activists, experts in Hong Kong are defending their decision to euthanize hundreds of hamsters and other small animals after several tested positive for COVID-19. 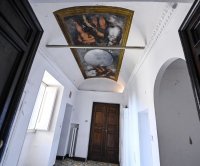 World News // 9 hours ago
Auction for Roman villa containing Caravaggio mural draws no bidders
Jan. 18 (UPI) -- An auction for a Roman villa featuring a ceiling mural by Italian painter Caravaggio that is at the center of an inheritance dispute was rescheduled after failing to receive any bidders.

World News // 18 hours ago
Israeli study suggests 4th COVID-19 shot not enough against Omicron
Jan. 18 (UPI) -- A fourth dose of the Pfizer/BioNTech coronavirus vaccine may not be enough to protect people from getting infected with the Omicron variant of COVID-19, a new Israeli study released Tuesday suggests.