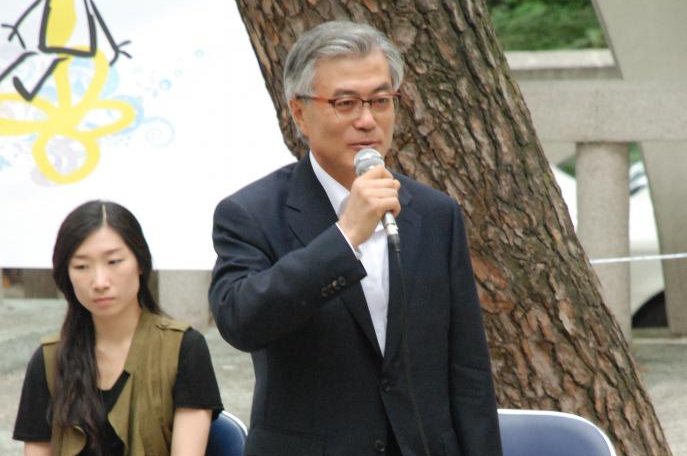 South Korea’s liberal opposition party politician Moon Jae-in allegedly was in favor of consulting North Korea’s opinion on a U.N. resolution, according to a memoir by a former South Korean foreign minister. File Photo by OneTheHuman/Flickr

SEOUL, Oct. 17 (UPI) -- A South Korean opposition party politician considering a presidential run in 2017 is under attack for his alleged support of abstaining from a vote on a United Nations North Korea human rights resolution in 2007 and seeking Pyongyang's opinion on the matter.

Moon Jae-in, who once led the Minjoo Party of Korea, was involved in the decision-making of then-President Roh Moo-hyun, according to an account in a memoir authored by former Foreign Minister Song Min-soon.

Moon was in favor of seeking input from North Korea on South Korean foreign policy, according to the book.

Moon has denied the claims and has said he "does not recall" the episode, a statement that has invited attacks from South Korea's conservative ruling party, Yonhap reported on Monday.

Ruling party politicians are expected to conduct investigations into the matter described as a violation of South Korean sovereignty, including a probe into the records of the president's office that may not yet be publicly available.

Moon's exchange with the Roh administration took place before November 2007, when the U.N. was expected to vote on a North Korea human rights resolution, according to News 1.

In Song's book, Moon had approved of a suggestion by former director of national intelligence Kim Man-bok to ask for Pyongyang's opinion on the matter.

Moon is denying the claim, but Song wrote Seoul refrained from voting on the U.N. resolution after receiving North Korea's input.

"The essence of this issue is that South Korea asked North Korea before making a diplomatic and security-related decision," said Rep. Chung Jin-suk.

World News // 22 hours ago
EU moves to require universal charger for all mobile devices
Oct. 4 (UPI) -- The European Parliament has approved a new regulation that would require all mobile devices, cameras and tablets sold in the European Union to have USB Type-C charging ports by the end of 2024.
Advertisement