Japan's defense chief stands by past statement on nuclear armament 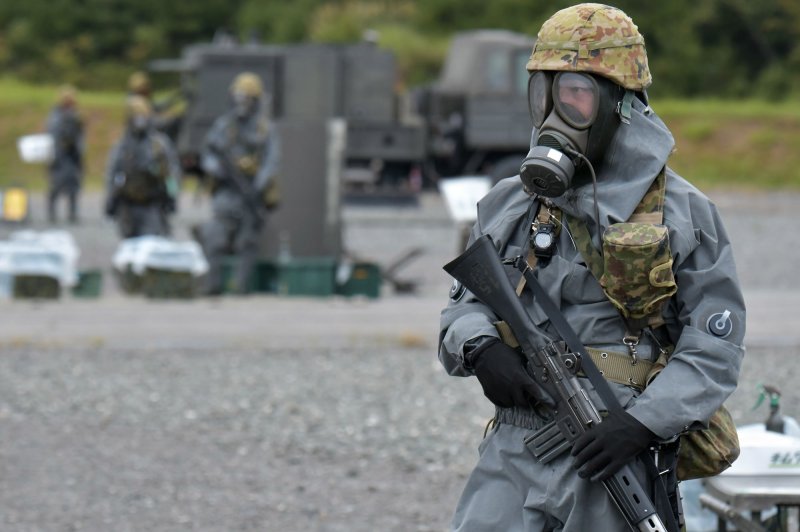 A member of Japan’s Ground Self-Defense Force takes part in a joint military exercise. Japan’s defense chief is under fire for previously suggesting a nuclear strategy for the country, and for saying a military conscription policy would not violate Japan’s constitution. File Photo by Keizo Mori/UPI | License Photo

In an interview with Japanese magazine Seiron in March 2011, Inada had said that in the long term Japan should look into a nuclear strategy, the Tokyo Shimbun reported Wednesday.

Inada, who was appointed defense minister in August, was a lawmaker with the ruling Liberal Democratic Party at the time and has served as a Cabinet member under Japanese Prime Minister Shinzo Abe.

Shinkun Haku, a Japanese politician of the opposition Democratic Party of Japan, criticized Inada's past statement.

"That someone with such a personal opinion became the defense chief is a problem," Haku said, while urging Inada to retract her previous remarks.

Japan is a signatory of the Treaty on the Non-Proliferation of Nuclear Weapons and relies on the U.S. extended nuclear deterrent.

But Inada said she has no plans to withdraw the statement because the remarks were made in the context of the situation at the time, according to the Japanese newspaper.

Inada also said she is not retracting remarks she made in the interview about implementing a military conscription policy because she "doesn't think the draft violates the constitution."

Tokyo is concerned about North Korea's multiple provocations and Chinese vessels that have entered Japan-claimed waters near the disputed Senkaku Islands.

North Korea's provocations continue to have an impact on Japanese politicians, according to a recent poll conducted by television network NHK.

A survey of Japanese citizens conducted Oct. 9-11 showed support for Abe has fallen since early September, as North Korea provocations have subsided and the country has not engaged in further tests during a national anniversary on Oct. 10.

Support for Abe was about 60 percent in September, but that figure was down by about 7 percentage points, according to the NHK poll.

World News // 12 hours ago
Woman dies, at least 41 others rescued after migrant boat sinks off Greece
Feb. 5 (UPI) -- A woman died and dozens of others were rescued after a boat carrying migrants sunk Sunday off the coast of the Greek island Leros.

World News // 1 day ago
Ukrainian art dealer sentenced for heist of Paul Signac painting from French museum
Feb. 4 (UPI) -- A Ukrainian art dealer who was found guilty of orchestrating the theft of a $1.6 million painting by the impressionist artist Paul Signac from a French museum has been sentenced to five years in prison for the heist.
Advertisement