Pyongyang refrained from provocations over the weekend but continues to develop its weapons program. 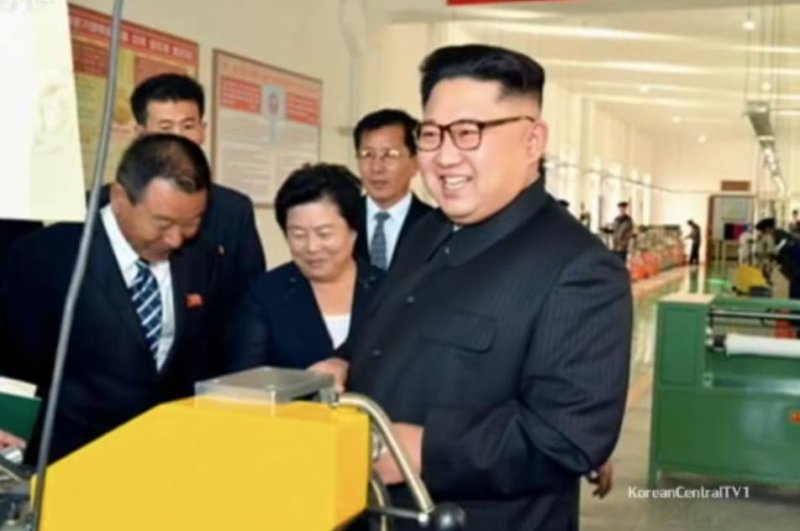 North Korea’s Kim Jong Un was absent from key events marking the 71st anniversary of the founding of the Korean Workers’ Party on Monday. File Photo screenshot of KCTV

SEOUL, Oct. 11 (UPI) -- After a week of speculation that North Korea may engage in a provocation during a major national anniversary, attention is being drawn to Kim Jong Un's notable absence in public affairs.

The North Korean leader, most recently seen providing field guidance at the Mangyongdae Revolutionary Souvenir Factory, did not appear at a ceremony at the Kumsusan Palace of the Sun, where other officials were reportedly gathered to pay respects to Kim Il Sung, South Korean news service Newsis reported Tuesday.

Kim Jong Un's name was not included on the list, raising speculations on whether he was either not in attendance or was omitted from the list for unknown reasons.

North Korea has also abstained from conducting another nuclear test and launching a long-range rocket from Sohae Satellite Launching Station.

Both the launch pad and the Punggye-ri nuclear site showed signs of continued activity in early October, according to recent analysis.

Kim Jong Un has also been absent at festive events, including a concert that commemorated the 71st anniversary of the founding of the Korean Workers' Party.

Prior to the anniversary U.S. forces stationed in South Korea and Japan, and South Korea's military, were on high alert for any signs of provocations. The escalated defense posture may have prompted North Korea to rethink more tests, according to the report.

Lack of North Korean activity over the weekend, however, may be temporary as Pyongyang continues to develop its nuclear weapons program.

Japanese network TV Asahi reported on Monday that Kim recently ordered North Korean scientists to develop an intercontinental ballistic missile with a range of 9,320 miles, and a submarine-launched ballistic missile that can reach 3,100 miles.

World News // 5 hours ago
European Union agrees to ban products tied to deforestation
Dec. 6 (UPI) -- The European Union on Tuesday provisionally agreed to a new law that would ban importing products connected with deforestation, a win for environmentalists.

World News // 9 hours ago
Al Jazeera asks for ICC to investigate Abu Akleh's death
Dec. 6 (UPI) -- The Al Jazeera Media Network said it officially filed a request to the International Criminal Court to conduct an investigation and prosecution of those responsible for the death of its journalist Shireen Abu Akleh in th

World News // 10 hours ago
Russia ramps up missile attacks on Ukraine after airfields hit
Dec. 6 (UPI) -- Russia slammed Ukraine with another barrage of missiles Monday night into Tuesday, hitting electrical plants and other civilian infrastructure facilities as another explosion hit a Russian airfield.