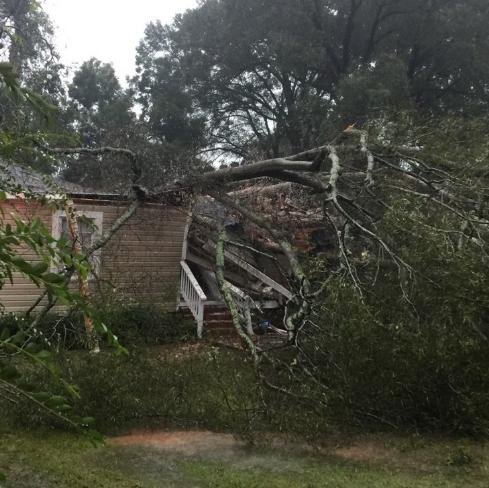 Hurricane Matthew was downgraded Sunday to a post-tropical cyclone and is heading out in to the Atlantic Ocean. It is expected to make a southern turn by Monday Map from the National Oceanic and Atmospheric Administration

A zoo worker at the Palm Beach Zoo is seen cleaning storm debris from one of the enclosure in West Palm Beach, Florida October 7, 2016. A state of emergency was declared in the state by Governor Scott on Wednesday as Hurricane Matthew left approximately 650,000 customer with out power. Photo by Gary I Rothstein/UPI... | License Photo

A construction crew is seen getting ready to cover windows at a BB&T bank in Lantana, Florida October 6, 2016. A state of emergency was declared in the state by Governor Scott on Wednesday as Hurricane Matthew could hit the east coast of Florida as a category 4 storm. Photo by Gary I Rothstein/UPI... | License Photo

Flooding was reported throughout North Carolina as a result of Hurricane Matthew. This photo was taken in Angier, NC. Photo from North Carolina Emergency Management

MIAMI, Oct. 9 (UPI) -- Matthew has lost its title as a hurricane. It was downgraded to a post-tropical cyclone at 5 a.m. Sunday and is moving out into the Atlantic Ocean, but is still considered a very dangerous storm.

At least seven people in North Carolina, four in Georgia and six in Florida have died as a result of the storm. President Barack Obama signed major disaster declarations Sunday to get more federal money and resources to Florida and Georgia.

Despite the new title for the storm, Matthew is still packing winds at the strength of a Category 1 hurricane, National Hurricane Center forecasters said. The only change is in its "core structure," which makes it a cyclone, CNN meteorologist Allison Chinchar said.

RELATED Obama: 'We don't know how bad damage could end up' from Hurricane Matthew

As of 8 a.m. Sunday, the storm was located 75 miles east of Cape Hatteras, N.C., the National Hurricane Center reported.

RELATED Obama: 'We don't know how bad damage could end up' from Hurricane Matthew

The deadly storm made an eastward turn and now has maximum sustained winds of 75 miles per hour, but is still expected to cause record-breaking flooding in eastern North Carolina, ABC13 reported.

"This is still an extremely dangerous situation," McCrory said. "We will not see the rivers peak possibly until Monday and Tuesday. Our models show very, very dangerous conditions as those rivers go over their edges."

Hurricane-force winds extend outward up to 70 miles mainly to the southwest of the center, the NHC reported. Tropical-storm-force winds extend outward up to 240 miles. A coastal marine observing site near Cape Hatteras, N.C., reported sustained winds of 63 mph with a gust to 84 mph. A private weather station near Nags Head, N.C., reported a wind gust of 70 mph near Manteo, N.C. North Carolina's Outer Banks and the mid-Atlantic will see heavy wind gusts and rain Sunday, CNN reported.

Florida Power & Light service trucks are seen working on street lights in West Palm Beach, Fla., on Friday. A state of emergency was declared in the state by Gov. Scott earlier this week as Hurricane Matthew approached. Friday, officials said more than 1 million customers were without power and at least four people had been killed by the powerful storm -- two by falling trees. Photo by Gary I Rothstein/UPI

Matthew is forecasted to turn south by Monday and weaken to a tropical storm or depression near the Bahamas and possibly near South Florida by Wednesday, the storm's track shows. Even as a cyclone, the storm's effects can be felt more than 100 miles away, according to the NHC.

Dangerous flash floods were reported in South Carolina and threats of life-threatening rainfall and storm surge were expected to continue even as the storm weakens, according to the Weather Channel.

The National Weather Service also warned people, as the storm approached the border of Georgia and South Carolina, to seek higher ground due to flash flooding.

RELATED A military view on climate change: It's eroding our national security

Two of the deaths in Florida were attributed to falling trees, ABC News reported late Friday. More than a million customers lost power in that state.

When the National Weather Service issued serious warnings to Florida, Georgia and South Carolina residents Friday, that put Matthew in the same league as Katrina as far as potential damage, rain and storm surge.

Matthew hit the northwestern Bahamas in the Caribbean on Thursday with powerful 140 mph winds, heavy rain and storm surge of up to 15 feet in some places. More than 250 have been reported killed in Haiti, with the cleanup now beginning to uncover the devastation there.

Matthew was the most powerful Atlantic storm since 2007 and the most powerful hurricane to hit Haiti in 52 years. It made landfall near Les Anglais in southwestern Haiti on Tuesday with 145 mph winds and had destroyed thousands of homes by the time it moved offshore. It left widespread death and destruction on the island. 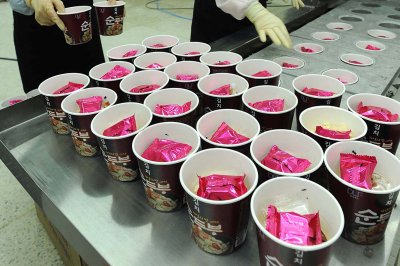