“Our outrage at this attack is enormous,” chief U.N.-Syria diplomat Staffan de Mistura said of the attack on an aid convoy. 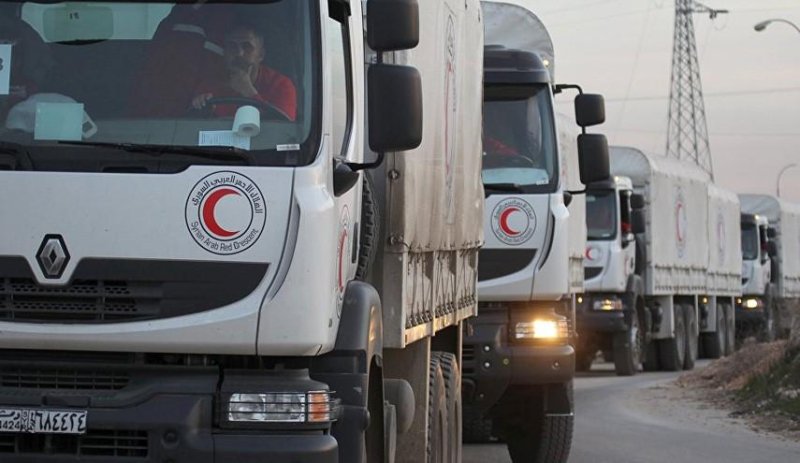 Convoys of trucks carrying food and humanitarian aid, destined for Aleppo, Syria, which were held up at the nation's border with Turkey for a week, were reportedly attacked by Syrian government forces on Monday, according to witnesses and officials. Photo courtesy Alalam, Islamic Republic of Iran Broadcasting

ALEPPO, Syria, Sept. 19 (UPI) -- The U.S. Department of Defense is examining claims that a Pentagon-backed rebel airstrike in Syria killed more than 60 people this weekend -- while others are looking into reports that President Bashar Assad's regime attacked an aid convoy Monday.

Multiple news agencies reported the airstrike over the weekend, which supposedly killed at least 62 Syrian troops and possibly prisoners, and wounded dozens more.

Monday, sources said the Pentagon has appointed a brigadier general to head an inquiry into the matter.

U.S.Central Command said an attack was halted Saturday when U.S. officials were informed by Russian forces that the bombing hit a Syrian government aid convoy, The Hill reported.

"We're still in the relatively early stages of determining what happened in this instance," a unidentified U.S. official told the congressional blog. "It is premature to say we have any real clarity with what we will conclude contributed to the situation.

"Clearly one of the factors that might be at play here is whether the forces were easily identifiable as Syrian government forces."

Sources said if commanders knew Syrian prisoners were present at the target site, they would have called off the airstrike.

"Clearly, it would not be the practice of the United States [to say] those are Syrian forces, but they are prisoners, so it's OK to hit them," the official said. "The United States would not intend to hit forces affiliated with the Syrian government, whatever their status."

In renouncing supposed violations by rebel forces, Syria's government on Monday declared the truce was dead and immediately began resuming attacks on Aleppo -- and may have even hit a convoy carrying aid into the hotly-contested city.

One report said at least 12 people were killed in the strike, mostly drivers of the aid trucks, Euronews reported.

Such an attack could help derail the ongoing peace process that's being brokered by U.S. and Russian officials. Two weeks ago, negotiators agreed to a cease-fire specifically to allow for the delivery of aid.

Truckloads of relief aid, including large food supplies, were held up at the Syria-Turkey border for days after the cease-fire began, though, partly because some were worried about the danger of delivering the supplies into such a hot zone.

"Our outrage at this attack is enormous. ... The convoy was the outcome of a long process of permission and preparations to assist isolated civilians," the United Nations' chief Syrian diplomat, Staffan de Mistura, said of the reported Syrian strike.

U.S. Secretary of State John F. Kerry, who helped broker the latest truce, condemned Assad's regime for striking a humanitarian convoy and stressed that the Russian government must control his actions.

Russian officials, meanwhile, said it was "senseless" for Assad's regime to observe the cease-fire "unilaterally."

"It was never committed to by Russian forces or Assad's regime," Brita Haji Hasan, head of the opposition council in Aleppo, said. "And this is not the first time a cease-fire has been attempted, only to fail."

A similar cease-fire agreement in February also failed. The latest was an attempt to end the ongoing Syrian civil war, which began in 2011 and has killed nearly a half-million people.

As many as 275,000 people remain trapped in Aleppo's battleground, without food, water or medical care, Stephen O'Brien, the U.N. undersecretary general for humanitarian affairs, said.

"They completely wasted time. They had a really good opportunity in the past week, with low casualty numbers and low bombing rates, to be able to send in aid, but we haven't seen that," Hadeel al-Shalchi, of the activist organization Human Rights Watch, told al Jazeera. "We know that the situation is deteriorating quickly. We know that people will begin to starve, as they ration the products that they have in the city at the moment."

Within the city, buildings have been ruined and children travel with bowls, seeking food from a local charity providing the only available meals, NBC News reported Monday. It added that, with the tenuous cease-fire over, another round of battles will begin. 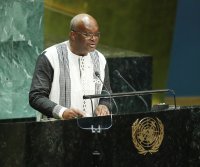 World News // 10 hours ago
Child soldiers massacre 138 in Burkina Faso
June 24 (UPI) -- The government of Burkina Faso said Thursday that child soldiers were used to carry out a massacre that killed at least 138 people in the village Solhan earlier this month.

World News // 22 hours ago
Hundreds of child remains found at old indigenous school in Canada
June 24 (UPI) -- Hundreds of remains have been found in unmarked graves at a former Canadian school for Indigenous children in Saskatchewan, the second such discovery in the country over the past month.

World News // 22 hours ago
South Korea discloses list of Korean War abductees for first time
June 24 (UPI) -- South Korea is disclosing the names of thousands of citizens who were abducted to the North during the 1950-53 Korean War, a first for the country in seven decades.

World News // 23 hours ago
Russia warns Britain over ship near Crimea, says video shows warning shots
June 24 (UPI) -- Amid a military skirmish involving a British warship in the Black Sea and purported warning shots fired by Russian forces, Moscow hinted on Thursday that next time they might target the ship itself.
Advertisement