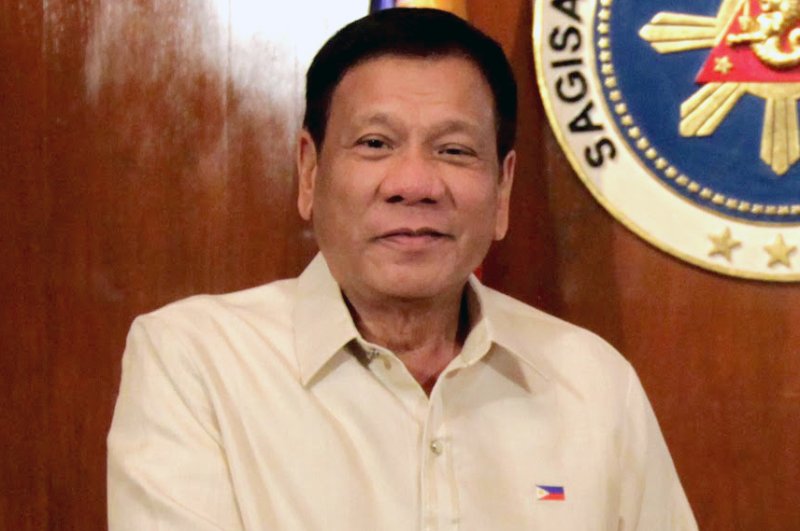 Philippine President Rodrigo Duterte, 71, allegedly ordered killings of criminals and political rivals during his tenure as mayor of Davao City, according to testimony by Edgar Matobato -- a former Filipino militiaman who was allegedly part of the infamous Davao Death Squad. Photo courtesy Malacañang Photo Bureau

MANILA, Sept. 15 (UPI) -- Edgar Matobato, a former Filipino militiaman, on Thursday said Philippine President Rodrigo Duterte ordered him and others to kill hundreds of criminals and political rivals while mayor of Davao City.

"We were tasked to kill criminals like drug dealers, rapists, [purse] snatchers. We kill those types every day," Matobato, 57, told a televised Philippine Senate hearing in Manila, adding that he and others of the alleged Davao Death Squad killed about 1,000 people in a 25-year-period.

Matobato provided explicit details of alleged killings, including one in which a victim was fed to a crocodile. He said victims would be shot or strangled, while some were disemboweled and thrown into the sea for fish to eat.

Matobato said he went into hiding when Duterte became president because he feared for his life. The former militiaman also said Duterte targeted four bodyguards of a local rival for mayor and ordered the bombing of a mosque in retaliation for an attack on Davao Cathedral in 1993.

Martin Andanar, Duterte's spokesman, on Thursday told reporters he does not believe Duterte is "capable of giving those orders."

The Davao Death Squad was first identified by Human Rights Watch in 2009. The Senate hearing in which Matobato testified is part of an investigation into alleged extrajudicial killings as part of Duterte's war on illicit drugs.

Duterte, 71, who served as the mayor of Davao City for 22 years, ran for the presidency on an anti-crime platform that appealed to the country's upper and middle classes who fear rising criminality. He said he would establish a ruthless administration that would eradicate crime syndicates in the first six months of his tenure, which began June 30.

He seemingly is working to keep his campaign promise. Philippine National Police officials in the said at least 3,140 people have been killed and 16,000 have been arrested since the start of Duterte's "war on drugs."

As part of his attempt to rid the Philippines of crime syndicates, he has taken measures such as placing a $43,000 bounty on the heads of Philippine National Police who are protecting the drug trade.

"I will be harsh as I can ever be. I will not relent. The campaign will be continuous. I will finish this war against corruption, drugs and crime," Duterte said in a speech in August. "I am inclined to place a reward on their head, the members of the PNP who are protecting drug syndicates in this country."

World News // 1 day ago
Cuba works to restore power after grid collapses in wake of Hurricane Ian
Sept. 27 (UPI) -- Cuba began the slow process of getting its aging electrical grid back online Wednesday morning after Hurricane Ian dealt it a devastating blow the day before that left the entire island nation in the dark overnight.

World News // 16 hours ago
Germany to postpone nuclear power phaseout
Sept. 28 (UPI) -- Germany is rethinking a 2011 decision to do away with nuclear power due in no small part to the energy crisis gripping much of Europe.

World News // 17 hours ago
U.S. Moscow Embassy security alert warns Americans to leave Russia
Sept. 28 (UPI) -- All Americans in Russia should leave immediately, according to a security alert from the U.S. Embassy in Moscow. The warning came as the Russian government rounds up men to force them to fight in Ukraine.