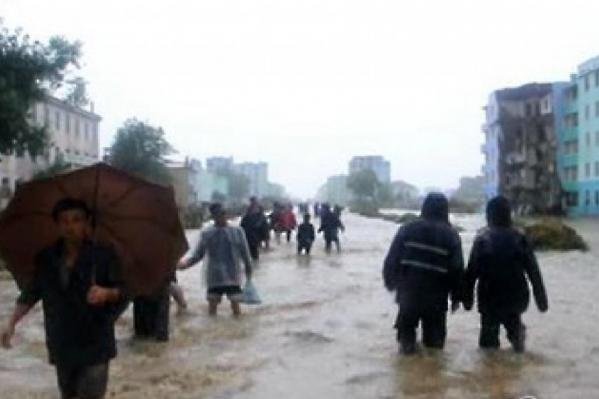 SEOUL, Sept. 6 (UPI) -- North Korea media issued a new statement on a recent flood that has led to the displacement of tens of thousands of people.

Pyongyang's state-controlled KCNA reported the floods that primarily hit the country's northeastern region resulted in at least 60 dead and 25 missing.

The flood has led to severe damages in rural and urban areas.

According to KCNA, nearly 20,000 acres of farmland were submerged under water and more than 5,100 acres of fields were washed away.

In cities and towns, 560 public buildings, 30 production plants, and 20 school buildings were either destroyed or flooded, the report stated.

A total of 50 miles of roads, six bridges, and at least one hydroelectric power station were destroyed.

KCNA had also stated Typhoon No. 10, which led to flooding and damages in neighboring Japan, had collided into a "low-pressure area" that had formed in the northwest.

Storms that brought heavy rain and strong gusts of wind then moved across the country between Aug. 29 and Sept. 2, according to Pyongyang.

The rescue took place on Aug. 31 after North Korea reportedly sought Chinese assistance in the rescue.

China dispatched two rescue boats and a crew of 10 people, according to the report.

Pyongyang did not confirm on Tuesday that it requested China's assistance in the rescues.

World News // 42 minutes ago
Firefighters among the dead in Turkey as crews battle major wildfires
Aug. 2 (UPI) -- More than 100 wildfires that have burned across Turkey have led to the deaths of several people -- including a couple of firefighters, officials said.

World News // 1 hour ago
North Korea warns of torrential rain after weeks of drought
Aug. 2 (UPI) -- North Korea said the country must prepare for typhoons and potential flooding in August after weeks of record-high temperatures that may have damaged crops.

World News // 5 hours ago
Afghan leader Ashraf Ghani blames U.S. pullout for Taliban resurgence
Aug. 2 (UPI) -- During a speech to lawmakers on Monday, Afghanistan President Ashraf Ghani called out the United States for abandoning his country as Taliban fighters step up efforts to take control of some areas.

World News // 9 hours ago
Shortages increase suffering of Lebanon's exhausted population
BEIRUT, Lebanon, Aug. 2 (UPI) -- A "typical" day in Lebanon now starts with finding an open gas station, hunting for medications or baby milk, struggling with power cuts and praying against getting sick -- or simply to survive the day.

World News // 22 hours ago
Japan's COVID-19 cases rise 87% during first week of Olympics
Aug. 1 (UPI) -- Halfway through the Summer Olympics in Japan, coronavirus cases are surging in the nation during a state of emergency though the outbreak is nowhere near as severe as other places in the world.
Advertisement