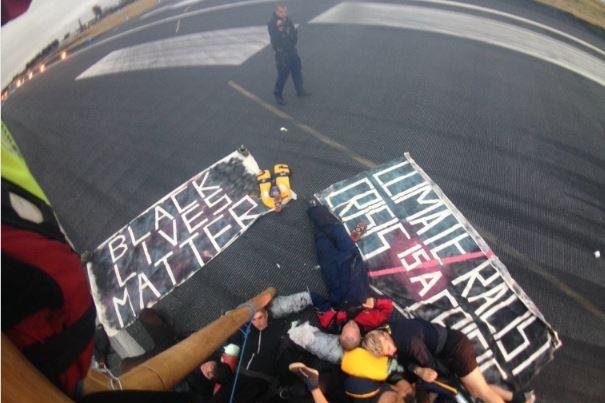 Metropolitan police removed them from a runway after they erected a wooden tripod and chained themselves together on it.

During a six-hour protest that started at 5:40 a.m., flights were canceled or rescheduled. Incoming flights were diverted to other airports.

Scotland Yard said it was investigating how protesters got on the runway.

Black Lives Matter UK said it was putting a focus on the environmental impact of air travel on black people locally and globally, saying the "climate crisis is racist" on Twitter. It posted images of protesters lying on the runway after chaining themselves together and displaying banners.

After they were removed, the airport runway reopened.

"We apologize for inconvenience caused this morning," the airport posted on Twitter.

The disruption caused chaos in the departure lounge of the airport in east London. Passengers cheered when it was announced over a loudspeaker that the protest had ended.

Flights to several cities in Europe were canceled or delayed.

Casey Collins, who was scheduled to fly to Luxembourg, told the BBC customers first assumed the delays were related to British Airways technical glitches at Heathrow and Gatwick.

"It is difficult flying with children," Sarah Antoniou, 31, from London, told the Guardian. "They're going to spend the whole first day of their holiday traveling. I'm running out of bottles for their milk. I allowed for some delay."

She was scheduled to fly to Málaga, Spain, with her husband and two children, 2 and 5 months, but her 9 a.m. flight was canceled. The family was rebooked on to a flight from Gatwick Airport, about 26 miles away, at 6:40 p.m.

"I understand the concerns, but there are other ways of making your point, which won't impact on young families," she said.

Pam Menzies-Banton and Lee Menzies-Banton, a married couple from east London, said the protest "has stopped these two black lives from going on holiday" to Palma, Spain, in a 10 a.m. flight.

In a statement, BLMUK said London City Airport is "an airport designed for the wealthy," noting the disparity in wages between users of the airport and people who live in east London where the airport is located.

The statement said: "By 2020, there will be 200 million climate refugees globally. Whilst at London City Airport a small elite is able to fly, in 2016 alone 3,176 migrants are known to have died or gone missing in the Mediterranean, fleeing conditions that they did not create because cheaper, easier and most importantly, safer avenues have been blocked by the UK and other European countries. Black people are the first to die, not the first to fly, in this racist climate crisis."

Group member Joshua Virasami told the Guardian the disruption to flights was "a very small inconvenience when you think about the consequences for black communities daily."

The group called for a protest next month over a deportation flight to Jamaica.

In August, protesters blocked roads in Nottingham, Birmingham and the M4 at Heathrow.

Black Lives Matter UK was launched last month. It's part of an international movement set up in the United States after George Zimmerman was found not guilty of killing Trayvon Martin in Florida four years ago.

Black people are the first to die not the first to fly. This is why London City Airport has been #shutdown pic.twitter.com/HWvwNirerX

World News // 12 minutes ago
COVID-19 cases hit 3-month high in S. Korea amid growing outbreak
SEOUL, April 14 (UPI) -- South Korea reported 731 new cases of COVID-19 Wednesday, the highest total in over three months, as officials warned of a looming fourth wave of the virus and cautioned that stricter distancing measures may be in store.

World News // 16 hours ago
Iran to increase uranium enrichment amid U.S. talks to return to nuclear deal
April 13 (UPI) -- The Iranian government told an international nuclear watchdog on Tuesday that it plans to increase enrichment of uranium, further violating terms of the 2015 nuclear deal that the U.S. is in the process of rejoining.