The Iranian ships approached to with 300 yards of the USS Nitze near the Strait of Hormuz. 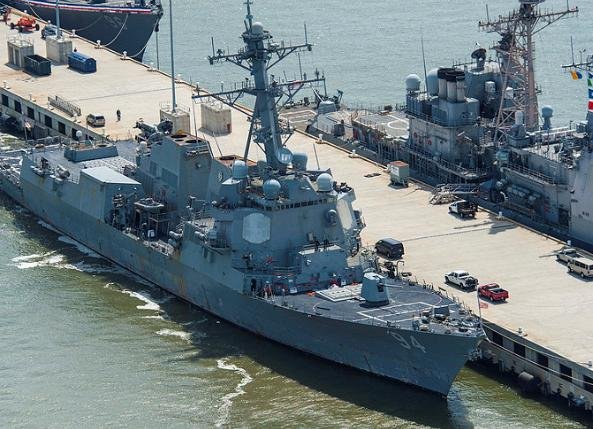 The U.S. Navy called the Iranian Revolutionary Guard's harassment near the Gulf of Hormuz of the destroyer USS Nitze unsafe and unprofessional. Photo courtesy of U.S. Navy

The guided-missile destroyer USS Nitze was in international waters near the Strait of Hormuz on Tuesday, accompanied by the destroyer USS Macon, when four smaller ships of the Iranian Revolutionary Guard approached it at high speed and failed to respond to 12 separate radio communications, Cdr. William Urban, U.S. Navy Fifth Fleet spokesman, said. The Nitze blew a whistle in five short blasts to indicate the Iranian vessels were proceeding dangerously, and fired flares before veering off course to avoid a collision. Two of the Iranian ships came within 300 yards of the Macon before all four slowed and left the area. No shots were fired.

"These sorts of unsafe and unprofessional actions can lead to escalation and miscalculation, which may necessitate additional defensive measures. Commanding officers have an inherent obligation for self-defense," Urban said. "We absolutely expect all maritime nations to act in a professional manner in accordance with international law."

The number of interactions between United States and Iranian military vessels regarded by the U.S. Navy as unsafe or unprofessional has increased this year, compared to 2015, a defense official told the Wall Street Journal.

World News // 7 hours ago
British PM Liz Truss vows to push ahead with tax-cut agenda
Oct. 5 (UPI) -- British Prime Minister Liz Truss vowed to continue tax cuts and deregulation despite political turmoil that erupted this week over economic reforms she says will put the country's sinking economy back on track.