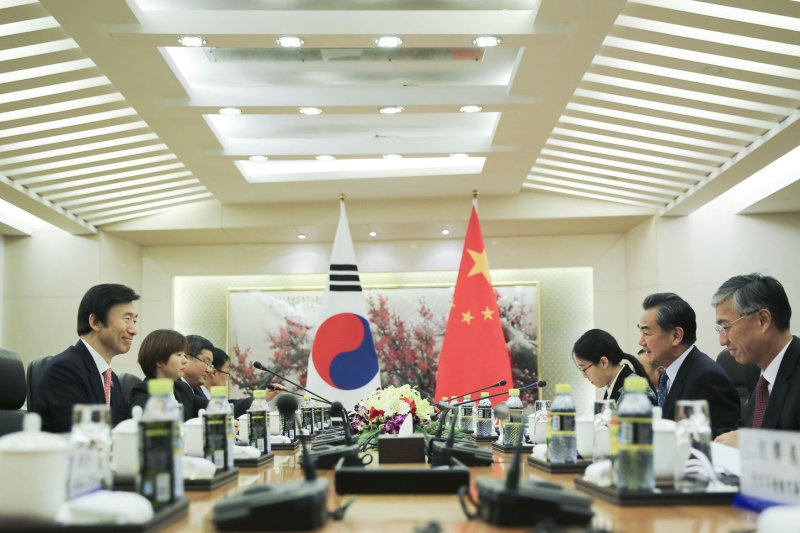 SEOUL, Aug. 24 (UPI) -- The foreign ministers of South Korea, China and Japan met in Tokyo on Wednesday to strongly condemn North Korea's launch of a ballistic missile from a submarine as an "unacceptable provocation."

"China and Japan, [permanent and non-permanent] members of the United Nations Security Council, hold in high regard cooperation with and implementation of U.N. Security Council sanctions Resolution 2270," Yun said Wednesday.

Concern has been rising in Seoul that China has been taking retaliatory measures against South Korean business interests in response to a joint decision to deploy THAAD on the peninsula.

But on Wednesday a South Korean official in Tokyo told Yonhap that measures like the cancellation of television programs featuring South Korean entertainers was not likely a Beijing initiative.

"It's still difficult to assess whether the cancellations or delays are being implemented within the framework of [Chinese] government sanctions" against the South, the unidentified official said.

"China is opposed to North Korea's nuclear weapons and missile development, and is opposed to any actions that heighten instability on the peninsula," Wang said.

In a separate statement, Wang told Yun that Beijing requests the withdrawal of deployment plans for THAAD, according to Yonhap.

Wang reportedly said that this is the "last chance" to mitigate the North Korea nuclear threat, suggesting THAAD is adding to tensions in the region.

The United States and South Korea have said the anti-missile defense system is for the purposes of defending against incoming North Korea projectiles and not for surveillance.

China and Russia are wary of the THAAD radar's monitoring capabilities.

World News // 6 hours ago
ICC will reopen investigation into Philippines' deadly drug war
Jan. 27 (UPI) -- The International Criminal Court announced that it will resume its investigation into alleged crimes against humanity in the Philippines under former President Rodrigo Duterte's war on drugs.

World News // 21 hours ago
11 killed as Russia launches new missile strikes in Ukraine
Jan. 26 (UPI) -- Russia launched 55 missiles against Ukraine on Thursday, 47 of which were shot down by air defense, according to the Ukrainian Ministry of Defense. A total of 11 people were killed by strikes, emergency services said.

World News // 1 day ago
Toyota CEO Akio Toyoda to step down, move to board position
Jan. 26 (UPI) -- Toyota CEO and President Akio Toyoda will leave those roles April 1 and become chairman of the board. Toyota Chief Branding Officer Koji Sato will be the new CEO.