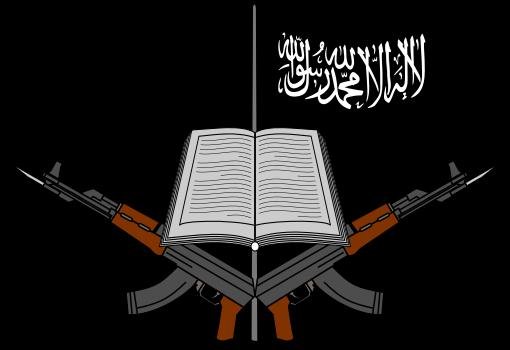 The logo, until 2015, of Boko Haram, whose new leader promised a fight against Nigerian Christians. Photo by ArnoldPlaton/Wikipedia

ABUJA, Nigeria, Aug. 5 (UPI) -- The man named by the Islamic State as Boko Haram's new leader is the son of the latter group's founder, Mohammed Yusuf.

Abu Musab al-Barnawi was declared "governor" of the Nigerian organization in an Islamic State magazine. He is the son of Yusuf, who founded Boko Haram in 2002 and was killed by police in 2009, CNN reported Friday, citing an unidentified source.

Following a leadership split in the sect last month, which saw the rise of Boko Haram spokesman Abu Barnawi at the expense of longtime acknowledged leader Abubakar Shekau, Barnawi spoke in an interview of a change in direction. Christians, and not Muslims, will be Boko Haram's target, he said.

He told the magazine the plan is now to "blow up every church that we are able to reach" instead of sectarian violence against other Muslims.

"[Westerners] strongly seek to Christianize the society ... they exploit the condition of those who are displaced under the raging war, providing them with food and shelter and then Christianizing their children," Barnawi said in an interview translated by SITE Intelligence Group.

He added Boko Haram would strike back by "booby-trapping and blowing up every church that we are able to reach and kill all those who we find from the citizens of the cross."

Barnawi has maintained a low profile within Boko Haram, a contrast to the fiery and hot-tempered Shekau, BBC News reported.

Shekau still maintains some power, with loyal soldiers and crucially, control of schoolgirls abducted in Nigeria's Chibok forest in 2014. The kidnapping of the girls brought global condemnation and attention to Boko Haram, and the abductees are seen as a powerful bargaining chip, CNN said. .

Boko Haram declared allegiance to the Islamic State in 2015, as its power waned. A concerted effort by Nigerian military and police forces, as well as by a coalition of troops from neighboring countries, has taken back most of the territory the group formerly held in northeastern, and predominately Muslim, Nigeria.

The oil-rich nation of about 182 million people is roughly half Christian and half Muslim.

World News // 44 minutes ago
At least 11 dead, 98 injured in Egypt train crash
April 18 (UPI) -- Egypt's Ministry of Health and Population said at least 11 people died and 98 more were injured after a train derailed near the city of Toukh, north of Cairo on Sunday.