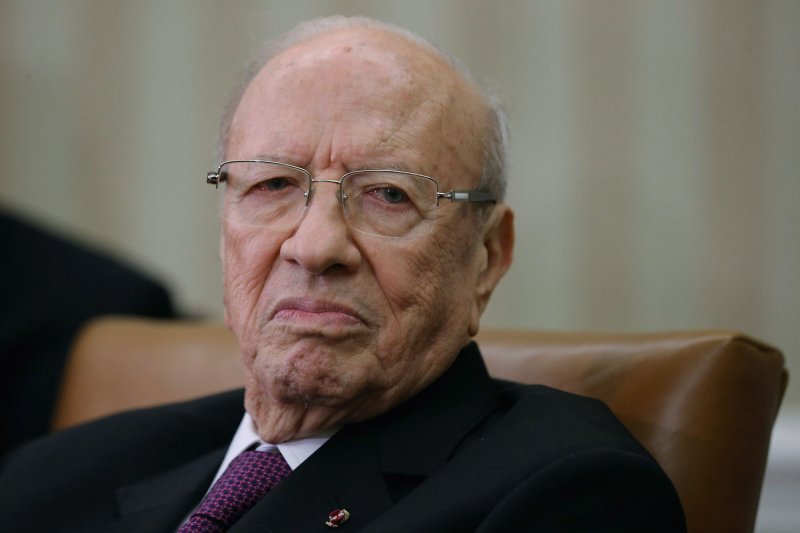 Tunisa President Beji Caid Essebsi listens to U.S. President Barack Obama deliver remarks to the press after a bilateral meeting in the Oval Office at the White House May 21, 2015 in Washington, DC. Tunisian Prime Minister Habib Essid, under pressure since Essebsi called for a new unity government, was ousted by Parliament Saturday with a vote of no confidence. File Pool Photo by Chip Somodevilla/UPI | License Photo

TUNIS, Tunisia, July 31 (UPI) -- After just 18 months as Tunisia's prime minister, the country's parliament ousted Habib Essid with a vote of no confidence.

Those who voted against Essid said he failed to tackle both security and economic issues the country is facing, Al Jazeera reported.

Only three members of parliament voted to keep Essie as prime minister, while 118 voted late Saturday to oust him and 27 abstained.

More than one-third of Tunisia's young people are out of work and unemloyment has gotten worse since a 2011 revolution during which President Zine el-Abidine Ben Ali was unseated.

Tunisia's revolution was the first of the Arab Spring and considered by many to be the most successful, since the country is now run as a parliamentary democracy.

"This will open the doors again for days, weeks, even months of negotiations between different political parties and different political players ... [putting] all the big projects that were supposed to take place on standby until a new government is formed and voted in," he said.

Meanwhile, he said, that standby mode won't be good for the country's political and economic situation.