Vital bridge in Venezuela could collapse as cars keep falling off, politician warns 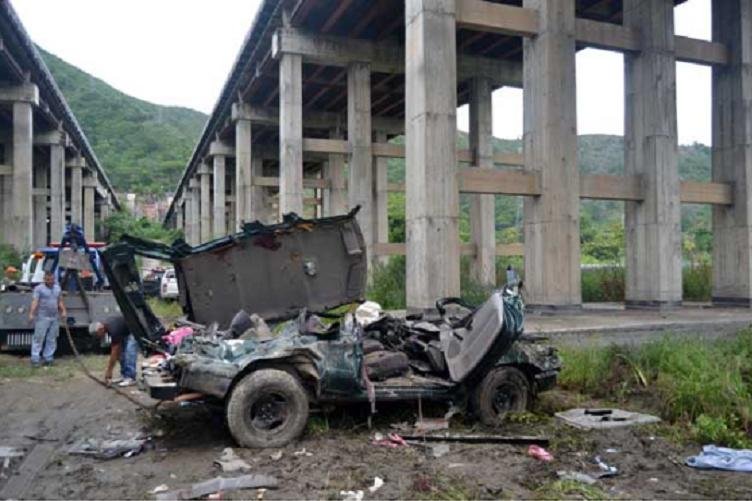 Venezuela's La Cabrera bridge-tunnel, considered one of the most important transport routes in the country, has had dangerous infrastructure problems on its viaduct, according to a National Assembly member who warns that if the viaduct collapses his state of Carabobo will be in "solitary confinement." Photo courtesy of Williams Gil

CARABOBO, Venezuela, July 14 (UPI) -- A National Assembly member of Venezuela's Carabobo state has warned the La Cabrera viaduct, one of the South American country's most vital bridge-tunnels, is in danger of collapsing after several deadly incidents.

Williams Gil, who also serves as president of the unicameral parliament's Standing Committee on the Family, on Thursday said a 2013 restoration of the viaduct was a "great scam." At the time, the Venezuelan Ministry of Land Transportation said the lifespan of the viaduct would be extended by 75 years.

"In 2013, they 'rehabilitated' the La Cabrera viaduct. Just three years later, we realize the great scam which that work represented," Gil said in a statement. "It is extremely alarming that in less than a month, four vehicles have fallen off of the viaduct."

Gil said potholes are persistent on the stretch of road and steel rods are visible in some sections. There are no guardrails in some areas, which has been the main cause of cars falling off after drivers lose control when trying to maneuver their vehicle to avoid potholes.

La Cabrera bridge-tunnel connects the Venezuelan state of Carabobo with the state of Aragua. Gil said it is the most important road in the country as thousands of vehicles travel on it each day, particularly cargo trucks that carry products from the docks of the city of Puerto Cabello to the rest of the country.

"We alert of a possible collapse of the La Cabrera viaduct for lack of maintenance," Gil said. "In the National Assembly, we will investigate the causes of the permanent deterioration."

Puerto Cabello is one of five ports that was taken over by the Venezuelan military this week as part of "war strategies" to provide food and medicine carried out by President Nicolas Maduro amid the country's economic crisis.

In January 2006, the Caracas-La Guaira viaduct was closed by the Venezuelan government under former President Hugo Chávez. A large section of the vital bridge collapsed about two months later. The collapse partially isolated Caracas from much of the country until a replacement viaduct was opened in June 2007.

"If the viaduct collapses, we'll be in solitary confinement. Lack of maintenance takes its toll, as it happened with ... the Caracas-La Guaira viaduct," Gil warned, adding that it could cost an estimated $4 million to repair the viaduct.

World News // 8 hours ago
Top EU court rules Google must delete inaccurate search results
Dec. 8 (UPI) -- Google must remove information from search results in Europe if a person can prove that those results are false, a European court ruled Thursday.