An unofficial market economy is giving rise to a moneyed class in the country. 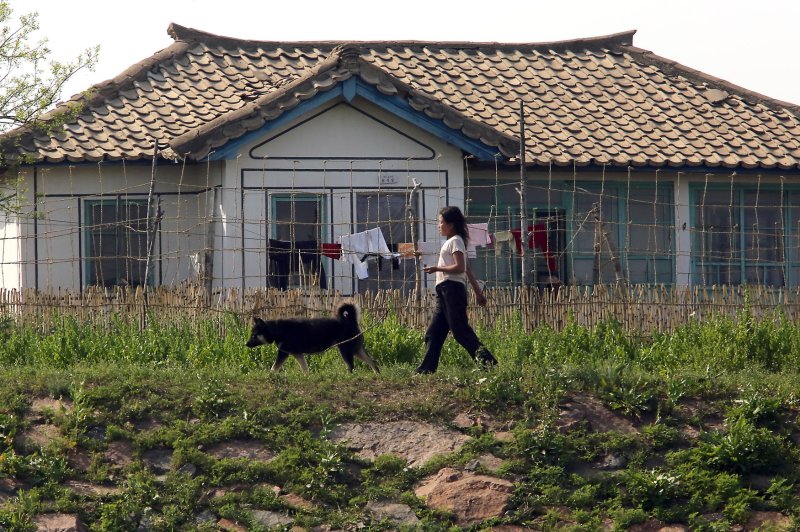 A North Korean woman walks her dog in a small village near the North Korean city Sinuiju, across the Yalu River from Dandong, China's largest border city with North Korea. Private ownership of land is being allowed in the country. File Photo by Stephen Shaver/UPI | License Photo

SEOUL, June 28 (UPI) -- North Korea is legitimizing the private ownership of land, although the practice has been taking root unofficially in the country.

A source in North Korea who reports on behalf of New Focus International, a news service founded by North Korean defector Jang Jin-sung, said the government has recently permitted the possession and sale of real estate.

The law comes with restrictions. The maximum amount of land a family is allowed to own is about 925 square feet, the source said.

The practice, however, has been ongoing.

"North Korea previously did not allow the possession or purchase of land or real estate, but in reality, that was only true for the poor. Those who had money could buy and sell property legally. In fact, it's a growing trend in North Korea at the moment," the source said.

The report also stated the number of private homebuilders in North Korea has increased, and Pyongyang, out of concern, decided to establish a policy so trading takes place within certain parameters.

The policy includes restrictions on purchasable land and penalties, which include confiscation, if traders are found to be in violation of state rules.

The increase in North Korean real estate activity is the result of a burgeoning market economy and the rise of a moneyed class, South Korean newspaper Kukmin Ilbo reported.

The materials for new homes are being imported from China, according to South Korea press, and demand for relatively upscale homes is on the rise.

Jobs such as interior design or in real estate property agency are becoming more visible, according to New Focus.

World News // 1 hour ago
Dutch airline KLM faces suit over 'greenwashing'
May 24 (UPI) -- Environmental groups have filed suit against KLM, alleging the Dutch airline has falsely claimed to be environmentally sustainable in advertising to improve its image, which is greenwashing.

World News // 6 hours ago
Hong Kong cardinal denies failing to register fund that helped dissidents
May 24 (UPI) -- Cardinal Joseph Zen of Hong Kong, along with five other people, denied charges in court on Tuesday that they failed to register a relief fund that was assisting protestors who faced legal and medical fees.

World News // 9 hours ago
Russia attacks dozens of towns in east Ukraine; 200 bodies found in Mariupol
May 24 (UPI) -- Ukrainian authorities said Tuesday they have discovered about 200 bodies beneath the debris of an apartment building in Mariupol, the southern port city that's been targeted for weeks by Russian forces.

World News // 12 hours ago
Biden: Taiwan policy of 'strategic ambiguity' has not changed
SEOUL, May 24 (UPI) -- A day after sparking outrage by claiming the United States would intervene militarily to protect Taiwan, President Joe Biden said Washington's policy of "strategic ambiguity" toward defending the island had not changed.