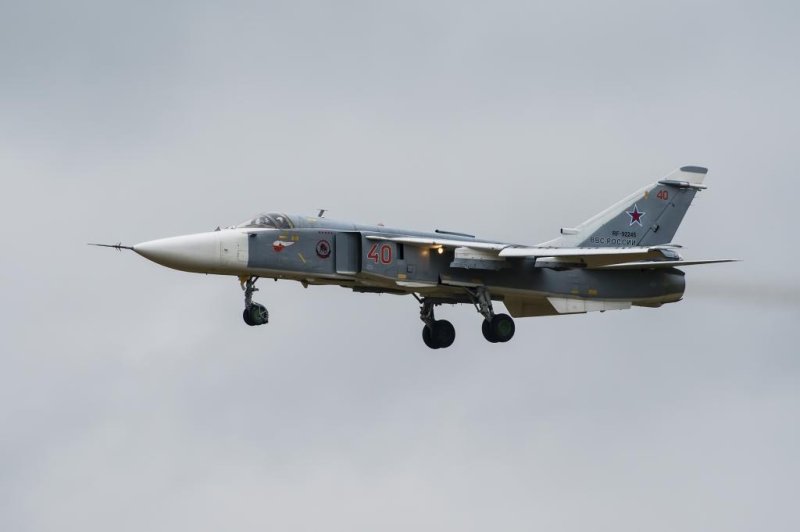 Two Russian bomber Sukhoi Su-24s, similar to the one pictured, left their base near Latakia, Syria, and bombed U.S.-trained Syrian rebels near the Jordanian border. The U.S. and military officials conducted a video call Saturday. File photo by Andrey Khachatryan/Shuttertock

"Department officials expressed strong concerns about the attack on the coalition-supported counter-ISIL forces at the At-Tanf garrison, which included forces that are participants in the cessation of hostilities in Syria, and emphasized that those concerns would be addressed through ongoing diplomatic discussions on the cessation of hostilities," Pentagon Press Secretary Peter Cook said in a statement.

The strikes occurred about 6 miles from the Jordanian border, according to a U.S. defense official, killing some New Syrian Army troops.

The U.S. diverted armed FA-18s to the area and the pilots did not receive an answer from the Russians on a previously agreed-upon pilot-to-pilot communications channel. After U.S. jets left the area to refuel, the Russians fired another round of bombs, the defense official said.

"Regarding safety, department officials conveyed that Russia's continued strikes at At-Tanf, even after U.S. attempts to inform Russian forces through proper channels of ongoing coalition air support to the counter-ISIL forces, created safety concerns for U.S. and coalition forces," the statement said.

This unusual video conference session is not normally used to discuss incidents. They are part of an understanding between the counter-Islamic State coalition and Russian Federation to maintain safety in air space over Syria.

According to the statement, "the two sides reiterated the need to adhere to measures to enhance operational safety and avoid accidents and misunderstandings in the air space over Syria."

Since last year, American and Russian warplanes have shared Syria airspace while supporting different side. Moscow backs the President Bashar Assad's dictatorship and the U.S. is arming rebels trying to overthrow it.

World News // 5 hours ago
Western nations pledge $1.5B in military aid to Ukraine
Aug. 11 (UPI) -- The defense ministers and representatives from 26 democratic nations met Thursday in Copenhagen where they collectively pledged more than $1.5 billion in military support for Ukraine.

World News // 9 hours ago
Source of London's Thames River runs dry amid prolonged heat
Aug. 11 (UPI) -- Extended hot and dry temperatures across Britain and much of Europe have caused the source of London's River Thames to dry up for the first time since 1976.

World News // 21 hours ago
Blasts at Crimea airfield take out Russian planes; deadly rocket fire in east Ukraine
Aug. 11 (UPI) -- Several Russian warplanes have been destroyed in dramatic explosions at a base in Crimea, the part of Ukraine that was annexed by Russia eight years ago, according to satellite imagery.