Attorney General Malahoo Forte objected to the flag, symbolic of support for the LGBT community, in a country where gay sex is illegal. 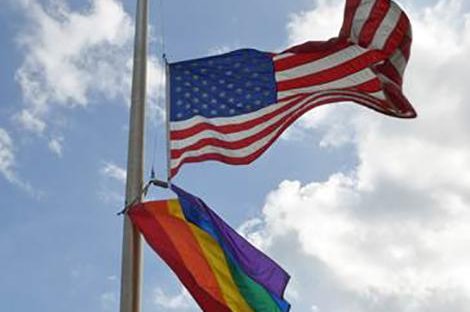 The U.S. Embassy in Kingston, Jamaica, not only lowered the U.S. flag to half staff but also raised a gay pride flag after a shooting at an Orlando, Fla., nightclub left 49 victims dead. Jamaican Attorney General Malahoo Forte took exception to the rainbow flag, saying it was disrespectful of the country's anti-gay sex law. Photo courtesy U.S. Embassy in Jamaica

The rainbow flag, symbolic of the LGBT community, was flown at U.S. missions around the world after a gunman killed 49 people at a gay nightclub in Orlando on Sunday. The pride flag was raised at the embassy in Kingston, though Jamaica law criminalizes gay sex but not homosexuality. Rights activists have noted a strong anti-gay culture in the country.

A social media comment by Jamaican Attorney General Malahoo Forte, since deleted, read "I strongly condemn #OrlandoNightClubShooting but find it disrespectful of Jamaica's laws to have #RainbowFlag flown here. #MyPersonalView." The U.S. embassy replied: "We're listening. Explain the legal reasoning? It was an attack of terror !!and!! hate, targeting the LGBT community."

Forte's comments were condemned on social media, where she was accused of bigotry. Two Christian groups in Jamaica, the Lawyers' Christian Fellowship and the Coalition for a Healthy Society, decried the shooting but defended her opinion.

RELATED 'We are Orlando': Hundreds gather at gay rights landmark Stonewall
RELATED Orlando gay nightclub shooting victims: Who they were

Embassies are considered foreign outposts, and the U.S. embassy in Kingston is technically on U.S. soil, but a statement from the Fellowship's president, Helene Corey-Nicholson, said the flying of the rainbow flag was "provocative, insensitive" and supportive of a "gay agenda."

"Notwithstanding the fact that the embassy is considered American territory in international law, the LCF asks U.S. Ambassador Luis G. Moreno to immediately take down the flag and, in so doing, eliminate potential misunderstanding and barriers to the natural outpouring of sympathy and support for the United States and those who have suffered."

Prime Minister Andrew Holness sent a message of condolence to the embassy after the shootings in Orlando, saying, "The bullet of terrorism does not discriminate, it does not know gender, class or sexual orientation. We all grieve the 49 lives lost."

Joshua Polacheck, the embassy's councilor for public affairs, later noted an outpouring of sympathy from Jamaican citizens, adding, "We are aware of the social media posts, but the fact the Jamaican prime minister himself sent a letter to Ambassador Moreno shows that for the most part, Jamaica understands that the attack was against humanity, irrespective of sexual orientation or religious beliefs. Your prime minister is the highest government official and so we have taken his words as the word for all Jamaica. We are mourning an attack on victims, who are firstly Americans; they were targeted for being LGBT."

World News // 12 hours ago
With 6 weeks to go, hurricane season may be all but over
While the Atlantic hurricane season does not officially end until Nov. 30, AccuWeather forecasters believe that the odds of any additional tropical storm formation in the near future are low.

World News // 14 hours ago
Russia says it blocked U.S. warship from entering its waters
Oct. 15 (UPI) -- The Russian Defense Ministry said it chased off a U.S. Navy destroyer about to violate the country's border near the Sea of Japan during joint Moscow-Beijing military drills.