Many of the items are from the present North Korean era of Kim Jong Un. 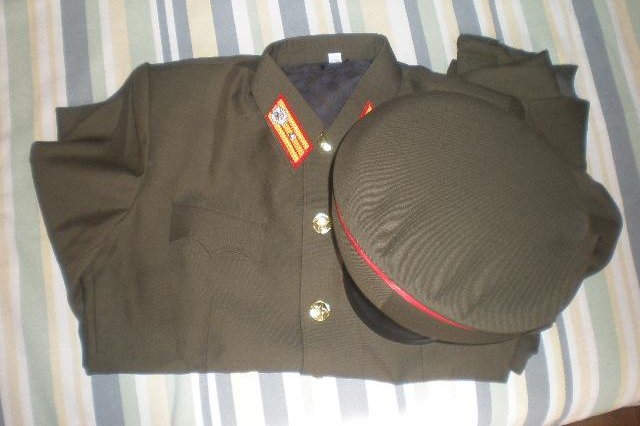 A North Korean People’s Army uniform on sale on eBay for $325 on May 19. The site yields more than 8,000 items for North Korea-related items. Photo courtesy of *a*a*a*a*a*/eBay

SEOUL, May 19 (UPI) -- North Korean military uniforms, medals and other state-sanctioned items are on sale on online auction sites like eBay.

The goods, some of them from sellers in China, also include contemporary propaganda posters and other paraphrenalia, Radio Free Asia reported.

Many of the items are from the present North Korean era of Kim Jong Un and propaganda work that idolizes Kim, music, film and posters are available online.

Some of the North Korea goods could be reaching the outside world as more foreign tourists visit the country and collect souvenirs.

But some of the items could be going online as part of a state-sanctioned operation in China to earn foreign currency for the regime, the report stated.

North Koreans who do business in China for state purposes have emerged as one of the top money-earning classes in the regime, South Korean news service Newsis reported.

As state officials loyal to Pyongyang, they are allowed to travel outside the country. The state has created an "incentive system," according to a source who spoke to RFA on the condition of anonymity.

The incentive system has been created as a way around tougher international sanctions against the country, the source said, and they are contributing to an emerging capitalist class.

Some of the officials are affiliated with the Reconnaissance General Bureau of Pyongyang and they operate out of the Chinese city of Dalian.

There, according to the source, the agents develop products like computer games and also raise revenue by engaging in hacking activities.

The agents are well rewarded and are able to invest in housing in Pyongyang, the source said.

World News // 41 seconds ago
Biden leaves Germany for Spain to attend NATO summit, pledges billions for food security
June 28 (UPI) -- President Joe Biden attended the final session of the G7 summit in Germany on Tuesday before he left for Spain to take part in a NATO Summit there, which will focus on Russia's war in Ukraine and NATO's future plans.

World News // 1 hour ago
Death toll in Ukraine mall attack rises to 18; Russia increases targets in east and south
June 28 (UPI) -- A commander told officials on Tuesday that Russia has intensified attacks in the eastern and southern parts of the country as crews continue to search for survivors of an attack on a shopping mall in central Ukraine.

World News // 18 hours ago
Quote from Beijing official on '5 years' of COVID-19 restrictions causes stir
June 27 (UPI) -- Residents of Beijing reacted with confusion and alarm Monday when a top Communist Party official was quoted in official media saying strict COVID-19 policies could be in place for five years.

World News // 23 hours ago
WNBA's Brittany Griner appears briefly in Russian court
June 27 (UPI) -- WNBA star Brittney Griner appeared briefly during a closed-door preliminary hearing with a new appearance set for July 1 but no other movement in her case since being initially detained on Feb. 17.

World News // 21 hours ago
Ancient Israeli mosaic returns home after years touring the world
June 27 (UPI) -- An ancient mosaic discovered in Israel more than 25 years ago, is now back in that country and went on display Monday after years spent touring prestigious museums around the world.

World News // 22 hours ago
Russia defaults on international debt, Kremlin fights designation
June 27 (UPI) -- The Russian government officially missed bond payments on international debt for the first time in a century on Sunday because of Western sanctions that limited access to the global capital markets.
Advertisement