The poster depicting Russian President Vladimir Putin and U.S. presidential candidate Donald Trump kissing is on the side of a barbecue restaurant in Vilnius, Lithuania. Photo by Kuele Ruke restaurant/Instagram

VILNIUS, Lithuania, May 15 (UPI) -- A Lithuanian street artist has created a poster on the side of a restaurant that depicts Russian President Vladimir Putin and U.S. presidential candidate Donald Trump kissing.

Artist Mindaugas Bonanu created the two-meter artwork on the wall of the barbecue restaurant Keule Ruke in the capital city of Vilnius.

Restaurant owner Dominykas Ceckauskas, who commissioned the drawing, told the Baltic News Service, "We saw similarities between the two heroes (Trump and Putin). ... They both have an ego that is too big, and it is funny that they get along well. We are in a sort of a Cold War again, and America may get a president who will want to be friends with Russia."

The image, called "Make Everything Great Again" -- a takeoff on Trump's campaign slogan -- is similar to the 1979 photograph that showed Soviet leader Leonid Brezhnev and East German President Erich Honecker kissing on the mouth, which is a customary greeting between socialist leaders. That kiss was displayed in a piece of graffiti on the East side gallery of the Berlin Wall in 1990.

Trump, the presumptive Republican presidential nominee, said at a press briefing in December, "I think I'd get along very well with Vladimir Putin," Putin likewise has praised the billionaire businessman, calling him a "really brilliant and talented person."

But their relationship cooled in March when the Kremlin attacked Trump's use of Putin in a political ad that attacked Democratic candidate Hillary Clinton and decried the "demonization" of the country.

The restaurant owner said, "We are in a sort of a Cold War again, and America may get a president who will want to be friends with Russia," he added.

World News // 21 hours ago
Ethiopian military has 'completed and ceased' operations in Tigray
Nov. 28 (UPI) -- Ethiopia's military launched an assault in the capital of the Tigray region in the northern part of the country Saturday. 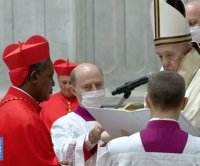