MIAMI, May 9 (UPI) -- At least 14 people aboard Carnival's cruise to Cuba suffered from stomach illnesses.

The ship, the Adonia, returned to Miami on Sunday after a week-long voyage carrying about 700 passengers. The norovirus was initially blamed for passengers falling ill but the cause remains unconfirmed. All passengers have recovered. Stool samples were collected from those affected and testing is ongoing to determine the source.

"It was a non-issue for nearly everyone on board," Carnival spokesman Roger Frizzell told the Sun Sentinel on Sunday. "The doctor reported yesterday that all were recovered and no new cases were reported."

Any passenger who felt ill during the cruise was asked to stay in his or her room.

"I think it was something I ate," Kathleen McGrann, 75, told the Sun Sentinel, adding that she recovered quickly.

The last time a U.S. cruise ship docked in Cuba was in 1978. Carnival received permission from both the United States and Cuba for the voyage, but the trip was almost cancelled because of Cuba's policy prohibiting people born in Cuba from returning to the island by sea.

Carnival, the world's largest cruise ship operator, threatened to abandon plans to do business with Cuba. But in late April, the Cuban government reversed its Cold War policy.

World News // 32 minutes ago
Man who stabbed woman dead in London is run over by car and killed
Jan. 24 (UPI) -- A man believed to have killed a woman by stabbing her to death on a road in west London also died after he was run over by a car on Monday, police said. 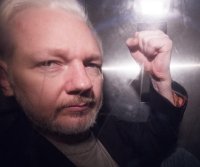