An ethnic Korean minister who assisted North Korean defectors was murdered, according to a group in Seoul.

North Korean agents are active in the border region with China, activists said Monday. They may be responsible for the disappearance of a Christian minister who was assisting defectors. File Photo by Stephen Shaver | License Photo

SEOUL, May 2 (UPI) -- North Korean agents are responsible for the "murder" of a Christian pastor who assisted North Korean defectors in China, activists in Seoul said Monday.

The Korean-Chinese minister with the surname Han had been the target of past North Korean threats, South Korean news agency Yonhap reported.

As part of investigations, China's public security officials are interrogating a woman, a possible informant, linked to Han's sudden disappearance. They have not confirmed he has been killed.

Activists said prior to the development the North had sent three agents across the border into the neighboring Chinese province of Jilin.

"We received news the pastor had been murdered," the activists said.

After taking Han's life, the agents returned to the North, they said.

The activists also said there are "many" North Korean agents secretly operating in the border region, and that the latest incident demonstrates defections are a critical issue to Pyongyang.

But neither is China taking the incident lightly.

"The Chinese authorities are not regarding this case as a mere homicide and are undertaking the investigation with considerable seriousness," the activist group said.

Choe Seong-yong, the group's representative, had also spoken to Yonhap on April 11.

During the interview, he had said he'd heard of a North Korean mandate that targeted South Korean and other foreign missionaries in the border area.

The order was issued in response to the April defection of 13 North Koreans from a state-run restaurant in Ningbo, China.

A source who was in contact with Choe said it's likely the agents killed the pastor because he refused to be taken to the North.

South Korean television network MBC reported prior to the incident a South Korean national and missionary also went missing on March 28 in the border area.

South Korea's unification ministry warned its citizens of the heightened risk of kidnapping and "acts of terror" on Monday after the North announced its plan to kidnap 120 South Koreans in the coming weeks, according to a source who spokes to South Korea press.

Correction: An earlier version of this article identified the Korean-Chinese pastor as Choe Sungyong. His surname is Han. Choe is the representative of the activist group in Seoul.

World News // 6 hours ago
U.N. creates emergency trust fund to save impoverished in Afghanistan
Oct. 21 (UPI) -- The United Nations said Thursday that it's established a fund designed to give aid directly to hundreds of thousands of needy people and the foundering economy in Afghanistan.

World News // 22 hours ago
Massive hailstone smashes Australian record
A severe thunderstorm in Australia smashed its way into the record books in a town not far from the country's northeastern coast. 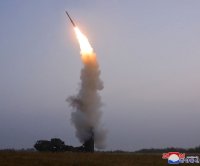