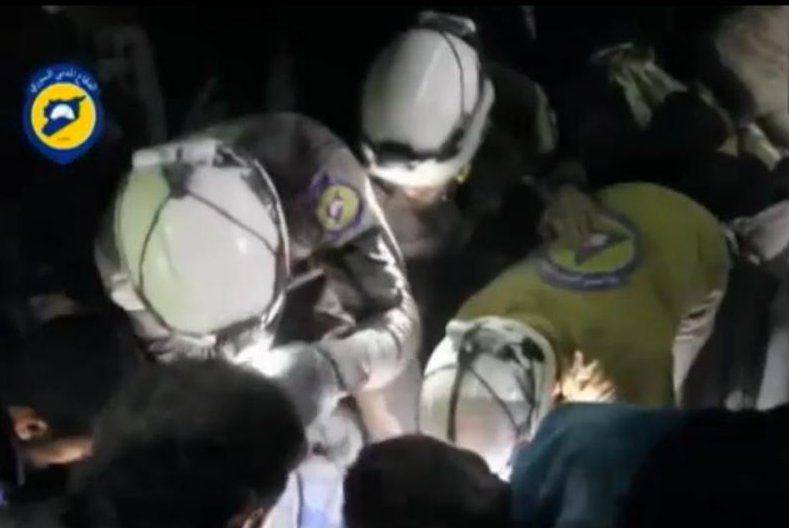 Rescuers search the rubble of the MSF-supported al-Quds hospital in Aleppo after a series of airstrikes pummeled the besieged Syrian city on Wednesday evening. Screenshot courtesy of euronews

ALEPPO, Syria, April 28 (UPI) -- Doctors Without Borders said its hospital in the Syrian city of Aleppo was destroyed by an airstrike that killed at least 27 patients and doctors.

The organization -- known officially as Médecins Sans Frontières or MSF -- has sharply condemned the Wednesday airstrike that local sources are blaming on Russia or the Syrian regime under President Bashar al-Assad. MSF warns the death toll is expected to rise.

"We are outraged at the destruction of Al-Quds hospital in Aleppo, Syria," MSF said in a statement. "The destroyed MSF-supported hospital in Aleppo had an [emergency room], an [out-patient department], intensive care unit and an operating theater. All now destroyed."

No official comment or claim of responsibility has been made over the bombing. One of the city's last pediatricians was killed.

"We are outraged by yesterday's airstrikes in Aleppo on the al-Quds hospital supported by both Doctors Without Borders and the International Committee of the Red Cross, which killed dozens of people, including children, patients and medical personnel," Kerry wrote. "While we are still trying to gather the facts surrounding the circumstances of this attack, it appears to have been a deliberate strike on a known medical facility and follows the Assad regime's appalling record of striking such facilities and first responders. These strikes have killed hundreds of innocent Syrians."

Although Assad's regime has been accused of the deliberate airstrike attack, the Syrian Arab News Agency, or SANA, which is linked to Assad's Ministry of Interior, quoted a military source who denied accusations that the Syrian Air Force targeted the hospital -- calling the allegations "baseless and untrue."

Recent hostilities in Syria have threatened a cease-fire established in February between the Assad regime and a consolidated group of rebel forces. The cease-fire does not include the Islamic State nor the al-Qaida-affiliated al-Nusra Front.

The recent increase in violence has killed more than 100 civilians in the last week in bombardments by both rebels and forces loyal to Assad.

"We condemn the destruction of the Al-Quds hospital in Aleppo, depriving people of essential healthcare. Hospitals are not a target," MSF said.

MSF hospitals have been subjected to airstrikes that have led to high-profile condemnation in the last year.

Two separate hospitals in Syria were struck in airstrikes in February, killing at least 12 people. In October, an MSF hospital in Kunduz, Afghanistan, was destroyed by a U.S. airstrike that killed 42 people, including patients and medical staff. President Barack Obama apologized for the errant strike but MSF has called for an independent international investigation.