Although the court -- called the Supreme Tribunal of Justice -- said the amendment itself was constitutional, the proposed bill was ruled unconstitutional because it sought to shorten Maduro's current term.

The Venezuelan opposition, consolidated as the Democratic Unity Roundtable coalition, is attempting to remove Maduro from power. The coalition received a qualified majority, or supermajority, in Venezuela's unicameral National Assembly after parliamentary elections in December.

Justice Arcadio Delgado Rosales wrote in the court's ruling that any amendment that shortens the length of a president's term "will not have a retroactive effect or be applied immediately," writing that this would constitute "an unquestionable breach of the exercise of sovereignty" and would amount to ignoring the will of the people.

National Assembly President Henry Ramos Allup said he was not surprised with the court's ruling. The opposition has often condemned the Supreme Tribunal of Justice for acting as an extension of the socialist regime established under former President Hugo Chavez.

"That was to be expected," National Assembly President Henry Ramos Allup told the Latin American Herald Tribune. "The regime wants neither a constitutional nor an electoral exit, because it would lose."

The opposition is also seeking to remove Maduro through a recall referendum. Opposition leaders have criticized the Venezuela's National Electoral Council, or CNE, for lagging behind in providing necessary materials to create a petition that will lead to a national referendum where Venezuelans could vote on whether Maduro should be removed from power.

World News // 8 hours ago
1 dead and 2 missing after Russia avalanche
Jan. 18 (UPI) -- Russian emergency officials said one person has died and two are still missing after an avalanche struck a ski trail in the North Caucasus region on Monday.

World News // 5 hours ago
Indonesian earthquake death toll reaches 84
Jan. 18 (UPI) -- Indonesian authorities said the death toll from a deadly earthquake that hit Sulawesi island in the darkness last week increased to 84 as the search for survivors and bodies continued.

World News // 6 hours ago
Suga tries to reassure Japan as approval rating falls
Jan. 18 (UPI) -- Under mounting criticism, Japanese Prime Minister Yoshihide Suga asked the legislature for patience Monday as he guided the country through the coronavirus pandemic in the middle of a struggling economy. 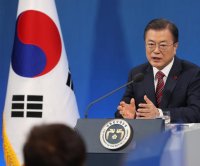 World News // 16 hours ago
Lebanon's bank depositors dread losing life savings
BEIRUT, Lebanon, Jan. 18 (UPI) -- Bank depositors in Lebanon, who woke up one day more than a year ago to face the painful reality that their life savings are stuck in the banks, are now bracing for the worst: Most of their money, if not all, is gone and cannot be recovered.