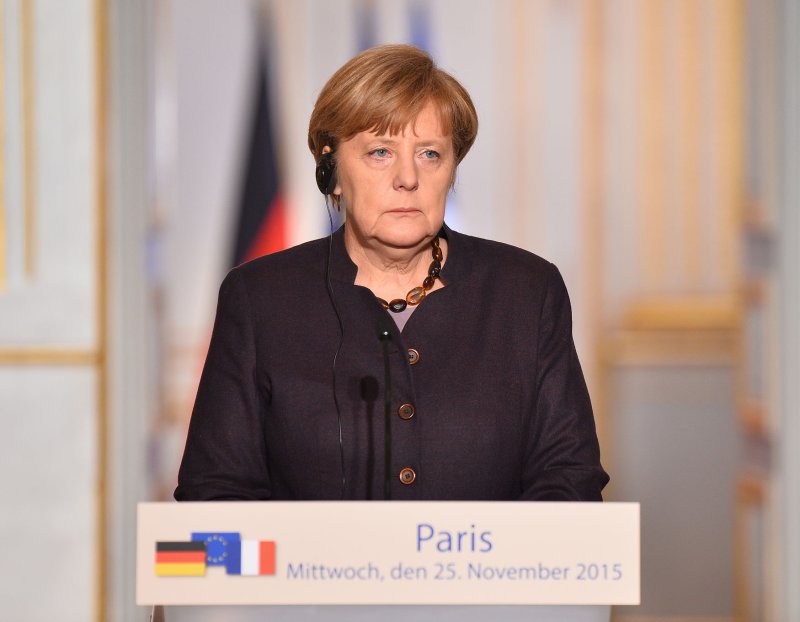 German Chancellor Angela Merkel visited Turkey along with European Council head Donald Tusk and European Commission Vice President Frans Timmermans to investigate the living conditions of migrant camps in Turkey as part of the migration deal between the two parties. They also met with Turkish Prime Minister Ahmet Davutoglu to discuss aspects of the deal such as the offer of visa-free travel for Turkish citizens. Photo by David Silpa/UPI | License Photo

NIZIP, Turkey, April 23 (UPI) -- German Chancellor Angela Merkel and officials from the EU traveled to Turkey Saturday to observe a refugee camp and discuss the terms of the migrate deal between the two governments.

Merkel was joined by European Council head Donald Tusk and European Commission Vice President Frans Timmermans as they met with Turkish Prime Minister Ahmet Davutoglu near the border between Turkey and Syria.

The visit follows the first month of the deal between the EU and Turkey which deports migrants who do not obtain asylum in Greece to Turkey.

Merkel said that the goal of the trip is to see the living conditions of the migrants in Turkey although some rights groups, such as Human Rights Watch, have criticized the visit claiming the officials chose to visit a "sanitized refugee camp."

The group was set to visit a migrant camp near Nizip to investigate the living conditions of the nearly 5,000 people there and then visit a child protection center.

Judith Sunderland, HRW's acting deputy director for Europe and Central Asia, said the group should visit camps on the other side of the border "to see the tens of thousands of war-weary Syrian refugees blocked" by Turkey from entering.

After their visit to the migrant camp the two sides will discuss aspects of the deal such as the more than 6 billion euros promised to Turkey to host the refugees and the offer of visa-free travel for Turkish citizens.

World News // 9 minutes ago
European Union agrees to ban products tied to deforestation
Dec. 6 (UPI) -- The European Union on Tuesday provisionally agreed to a new law that would ban importing products connected with deforestation, a win for environmentalists.

World News // 3 hours ago
Al Jazeera asks for ICC to investigate Abu Akleh's death
Dec. 6 (UPI) -- The Al Jazeera Media Network said it officially filed a request to the International Criminal Court to conduct an investigation and prosecution of those responsible for the death of its journalist Shireen Abu Akleh in th

World News // 5 hours ago
Russia ramps up missile attacks on Ukraine after airfields hit
Dec. 6 (UPI) -- Russia slammed Ukraine with another barrage of missiles Monday night into Tuesday, hitting electrical plants and other civilian infrastructure facilities as another explosion hit a Russian airfield.