The El Boske resort in the Honduran island of Roatán was recently seized by an international task force after its owner, Franco "The Wizard" Daniel Lombardi, was arrested on April 1. Daniel Lombardi is accused of being the operator of Joaquin "El Chapo" Guzman's Sinaloa Cartel in Honduras. Photo courtesy of El Boske

An international task force made up of Mexican and Honduran authorities as well as the U.S. Drug Enforcement Administration recently seized Daniel Lombardi's assets. Most businesses were confiscated in the popular tourist island of Roatán, El Universal reported.

Daniel Lombardi, 45, was arrested on April 1 and later extradited to the United States over charges of trafficking cocaine and heroin, as well as money laundering. In simultaneous raids, nine buildings, three commercial companies, several vehicles and the El Boske tourism resort were seized. Three other companies were seized in San Pedro Sula and Tegucigalpa, the Honduran capital.

Guzman traveled to Honduras often during his years on the run between 2001 and 2014, when he was recaptured after his first prison escape. He was captured in the city of Los Mochis in his home state of Sinaloa on Jan. 8 after his second escape, this time from Mexico's Altiplano Federal Prison on July 11.

The DEA has said Guzman's Sinaloa Cartel dominates the illegal drug market in nearly the entire United States. A report by the agency states the criminal organization is most powerful "along the West Coast, through the Midwest and into the Northeast."

World News // 40 minutes ago
Firefighters among the dead in Turkey as crews battle major wildfires
Aug. 2 (UPI) -- More than 100 wildfires that have burned across Turkey have led to the deaths of several people -- including a couple of firefighters, officials said.

World News // 1 hour ago
North Korea warns of torrential rain after weeks of drought
Aug. 2 (UPI) -- North Korea said the country must prepare for typhoons and potential flooding in August after weeks of record-high temperatures that may have damaged crops. 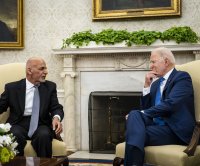 World News // 5 hours ago
Afghan leader Ashraf Ghani blames U.S. pullout for Taliban resurgence
Aug. 2 (UPI) -- During a speech to lawmakers on Monday, Afghanistan President Ashraf Ghani called out the United States for abandoning his country as Taliban fighters step up efforts to take control of some areas.

World News // 9 hours ago
Shortages increase suffering of Lebanon's exhausted population
BEIRUT, Lebanon, Aug. 2 (UPI) -- A "typical" day in Lebanon now starts with finding an open gas station, hunting for medications or baby milk, struggling with power cuts and praying against getting sick -- or simply to survive the day.

World News // 22 hours ago
Japan's COVID-19 cases rise 87% during first week of Olympics
Aug. 1 (UPI) -- Halfway through the Summer Olympics in Japan, coronavirus cases are surging in the nation during a state of emergency though the outbreak is nowhere near as severe as other places in the world.
Advertisement