More than 54 years after the U.S. cut off all ties with Cuba, President Barack Obama is making history by visiting the Caribbean island and restoring diplomatic and economic relations. 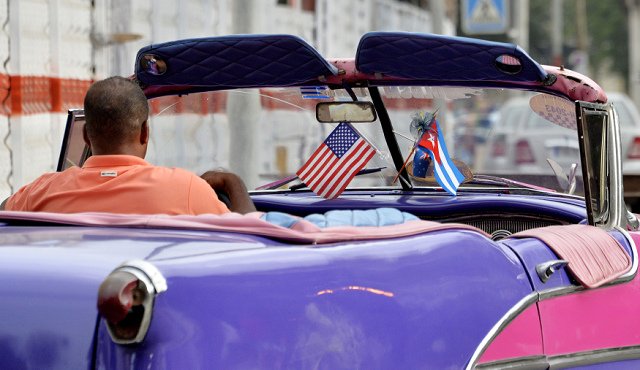 The driver of a vintage car proudly displays American and Cuban flags on his dashboard while driving through downtown Havana on March 19. Barack Obama's visit to Cuba makes him the first U.S. president in 88 years to do so. Photo by Olivier Douliery/ABACA/UPI

"It's been nearly 90 years since a U.S. president stepped foot in Cuba," Obama said after arriving with his family. "It is wonderful to be here."

Major changes have already happened, and more are rolling out. Is Cuba ready for the change? Here are Obama's primary goals:

Following a wave of nationalizations by the Cuban government in 1961, the United States cut off diplomatic relations with Cuba. President Obama reopened discussions with Cuba recently, working with them to re-establish embassies in Washington and Havana. The two nations have agreed to cooperate on migration, counternarcotics, environmental protection and human trafficking, among other issues.

President Obama is adjusting regulations, improving travel and remittance policies to further "people-to-people contact, support civil society in Cuba, and enhance the free flow of information to, from, and among the Cuban people."

The United States is restoring more than 100 direct commercial roundtrip flights a day to Cuba. The goal is to help the Cuban economy grow and open Cuba to foreign ideas and culture.

Easing a longtime trade embargo, expanded sales and exports of certain goods and services are now being allowed from the United States to Cuba. It's expected this change will make it easier for Cuban citizens get lower-priced goods, which will improve living standards and limit dependence on the Cuban government.

A portrait of President Obama hangs on a Havana street. Photo by Olivier Douliery/ABACA/UPI
Advertisement
Imports

Americans are now allowed to import more goods from Cuba, though this will not include any of the hundreds of vintage cars that survive on the island. Licensed U.S. travelers to Cuba will be authorized to import $400 of goods from Cuba – but no more than $100 of Cuba's world-famous cigars or rum.

Havana is well known for its vintage American cars, but American collectors will find it tough to bring any of them home. Photo by Olivier Douliery/ABACA/UPI
Expanded communications

With internet penetration of just 5 percent, Cuba is one of the least connected countries in the world. Telecom companies are now allowed to build infrastructure in Cuba for commercial phone and internet services, expanding coverage and lowering the cost for the island's citizens.

Havana's streets have a maze of wires, but not for internet access. Photo by Olivier Douliery/ABACA/UPI

World News // 1 hour ago
Hurricane Rick swirls to life, expected to strengthen and target Mexico
Mexico's southwestern Pacific coast will need to remain on high alert through the weekend as newly formed Hurricane Rick has churned up in the warm tropical waters of the eastern Pacific Ocean.

World News // 1 day ago
Haitian gang leader threatens to kill missionaries held hostage unless ransom is paid
Oct. 21 (UPI) -- The leader of a Haitian gang has threatened to kill hostages if the ransom it has demanded for 17 U.S. and Canadian missionaries isn't met.
Advertisement