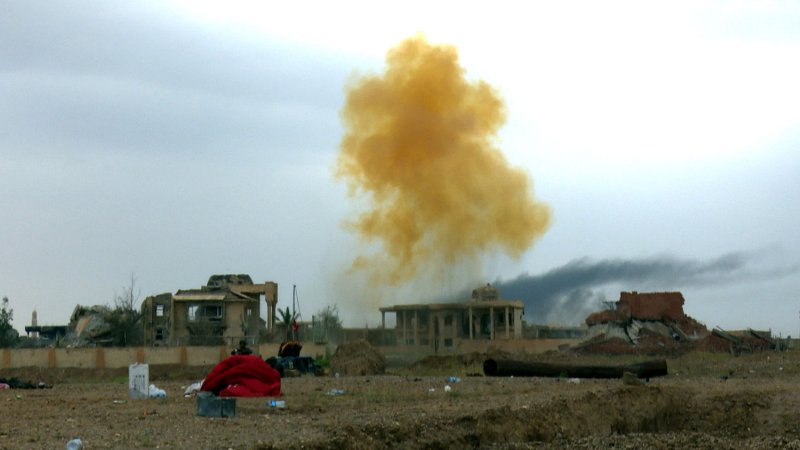 Smoke rises during fighting between Iraqi army and Islamic State (IS) militants, in Tikrit, northern Iraq, on April 1, 2015. The Islamic State has reportedly completed a chemical attack on an Iraqi town, killing at least one child and injuring 400 others. Photo by Alaa mohamed/UPI | License Photo

Haider al-Abadi Prime Minister of Iraq during a press briefing, in Baghdad in Iraq, October 06, 2015. Al-Abadi says the Islamic State has attacked an Iraqi town using chemical weapons. A 3-year-old girl is said to have died from exposure to the unknown chemical. Photo by Mohammed Abbas /UPI | License Photo

The latest attack took place in the town of Taza on Saturday morning, days after the initial chemical attack Tuesday. The girl died from exposure to the substance shortly after the attacks, officials said. She suffered from kidney and lung failure.

At least 400 people have been exposed to the substance, which the Wall Street Journal reports causes symptoms similar to that of exposure to chlorine or mustard gas.

Others infected have experienced respiratory problems and skin irritation. At least four victims were transferred to a Baghdad medical facility in critical condition. German and American research teams have arrived in the area to test the chemicals, according to The Guardian.

"There is fear and panic among the women and children," said Adel Hussein, a official in Taza told the British news outlet. "They're calling for the central government to save them."

This week, a United States. official reported a detained IS operative gave details about the group's chemical capabilities, saying they plan to use weaponized mustard gas in Iraq and Syria. The operative is reportedly a chemical weapons specialist and former Iraqi government employee during Saddam Hussein's regime. He was captured about a month ago.

Mustard gas is controlled as a battlefield weapon under several protocols of combat. The official said the group, also known as ISIS, ISIL and Daesh, does not have weapons with adequately concentrated mustard gas to kill, but to cause injuries and scars.