Kim Ryon-hui, the North Korean defector who had said she was tricked into traveling to South Korea by Seoul’s spies in China, said life is better in the North.

A Chinese man looks at photos of North Korea's leaders posted outside the North Korean embassy in Beijing on January 6. A North Korean defector in the South said she hopes to return to Pyongyang, where she has family. Photo by Stephen Shaver/UPI | License Photo

SEOUL, March 4 (UPI) -- Kim Ryon-hui, the North Korean defector who said she was tricked into traveling to South Korea by Seoul's spies in China, held a press conference where she reaffirmed her desire to return to the North.

Kim said she attempted suicide twice while in the South, local news service Oh My News reported. Kim said she left behind her parents, a physician husband and a daughter in Pyongyang, and that she "now has hope that she should be able to live, and return" to the North Korean capital.

The defector is a South Korean national, and last September Seoul rejected her request for repatriation to the North, citing current laws that ban defectors from leaving once they are naturalized.

Kim has been busy – staging a one-woman protest outside the Unification Ministry since Feb. 24. On Friday, she traveled to Masan in South Gyeongsang Province to speak to reporters.

Kim said she left North Korea for China in May 2011 to visit relatives across the border. During her stay, she met a "broker" who brought her to the South, where, according to her testimony, she was forced to resettle.

Kim said she is a tailor by training, and she graduated first in her class at a fashion design training school in the North. She was well off by North Korean standards, but she has so far been unable to procure a South Korean passport that she could use to leave the country.

Kim also said she began spying for North Korea in order to be charged with a crime and, hopefully, be deported.

None of her plans have worked, she said, and her activism is now centered on focusing attention on her cause – repatriation – and spreading awareness about "real life" in North Korea to South Koreans.

On the latter subject, Kim said South Koreans know very little about life in North Korea, and that upon her arrival in the South, she was surprised by the sight of numerous homeless people in the Seoul subways.

Kim said she had never seen homelessness in Pyongyang, because if someone is lost they are taken to their home by a helpful stranger.

"I was surprised that [homeless South Koreans] don't look for their parents or siblings," she said, stating she had lived in a socialist country for 42 years.

World News // 14 hours ago
IOC president says there's no 'plan B' for Tokyo Olympics this summer
Jan. 21 (UPI) -- The head of the International Olympic Committee said Thursday that the postponed Summer Games in Tokyo are scheduled to open in July, and there's no "plan B."

World News // 16 hours ago
Dual suicide bombing attacks kill more than 30 in Baghdad
Jan. 21 (UPI) -- Two suicide bombings targeted a marketplace in central Baghdad on Thursday, the first of its kind there in nearly two years. 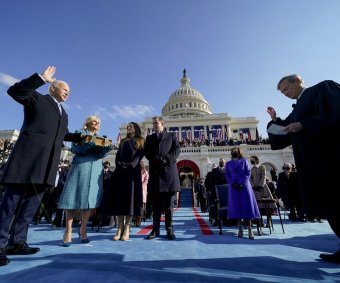