Police are investigating the incident as arson.

Migrants arrive at the central railway station in Munich on September 6, 2015. Germany has been lauded for opening its borders to refugees from Middle East conflict zones, but anti-immigration attacks in the country are on the rise. On Sunday, a crowd of onlookers cheered as a hotel being converted into a migrant shelter burned in Bautzen, Germany. Photo by David Silpa/UPI | License Photo

BAUTZEN, Germany, Feb. 21 (UPI) -- Crowds of onlookers cheered as the roof of a German hotel being converted into a migrant shelter went up in flames early Sunday.

Police are treating the fire in eastern Saxony as an arson. No one was injured in the blaze, but the Guardian quoted police as saying a crowd of locals that had gathered at the scene "reacted to the arson with derogatory comments and undisguised joy," and some reportedly tried to prevent firefighters from dousing the flames.

The German state of Saxony is reportedly home to an anti-Islam, anti-immigration group known as Pegida.

The incident comes three days after about 100 anti-refugee protesters in Clausnitz, also in Saxony, blocked the arrival of a bus of migrants on the way to the town's shelter -- which is reportedly directed by a member of the anti-immigrant Alternativ fuer Deutschland party.

While Germany has been lauded for opening its borders to refugees from Middle East conflict zones, the country has also experienced a surge in attacks against refugee camps -- 924 in 2015, up from 199 the year prior, according to federal statistics. 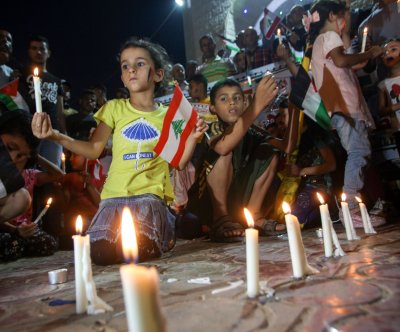