Tens of thousands of deaths could have been prevented with the right care, South Korea’s disease control agency said. 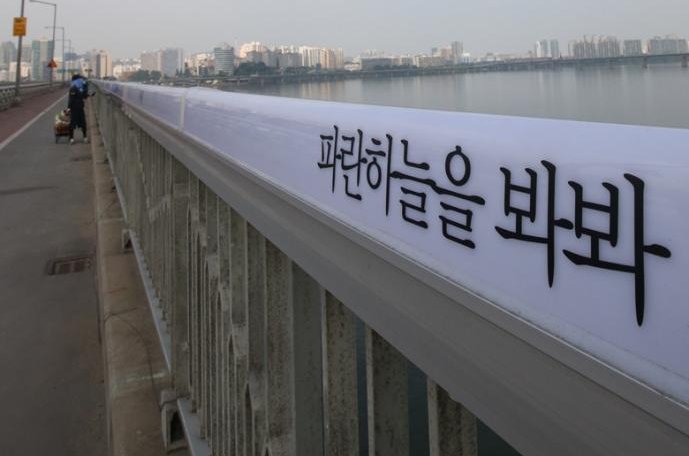 A sign that runs across the Mapo Bridge in Seoul, South Korea, reads, "Look at the sky," one of several upbeat slogans across a span once dubbed "Suicide Bridge." The city has made efforts to curb fatalities. File Photo by Yonhap

SEOUL, Feb. 5 (UPI) -- One out of three deaths in South Korea could have been prevented, according to a report from the Korea Centers for Disease Control and Prevention.

The report on mortality statistics stated that according to data from 2014, avoidable deaths represented 34.9 percent of all deaths, South Korean news agency Yonhap reported.

Avoidable mortality is defined as unnecessary, untimely death from which, in the presence of effective care, premature death should not occur.

Of the avoidable deaths, 32,483 cases were treatable illnesses, and another 75,293 were "preventable." A number of those cases overlapped, the report stated.

Men registered higher rates of avoidable mortality than women: 44.3 percent of all male deaths in 2014 could have been prevented, with 23.5 percent for women.

Avoidable mortality for South Korean men has been on the decline since 2000, when 56.8 percent of all male deaths were categorized as avoidable or preventable.

South Korea press did not break down causes of death, but it is possible some portions of the data represented the country's high suicide rate, which is No. 1 among the developed nations of the Organization for Economic Cooperation and Development.

The Korea Herald reported avoidance of psychiatric treatment and excessive alcohol consumption were linked to the rate of suicide in the country.

Up to 40 people take their lives daily in South Korea, according to government statistics, and suicide is the fourth most common cause of death.

World News // 11 hours ago
U.S. Embassy in Kyiv reopens with flag-raising
May 18 (UPI) -- Secretary of State Antony Blinken announced Wednesday that the U.S. Embassy in Ukraine's capital, Kyiv, has reopened for the first time since Russia invaded Ukraine three months ago.

World News // 14 hours ago
French government to appeal city's move to allow burqinis at public pools
May 18 (UPI) -- One day after lawmakers in Grenoble, France voted to allow Muslim women to wear burqini swimsuits at state-run swimming pools, the French government said Wednesday it will appeal the decision.

World News // 16 hours ago
British MP out on bail after rape, sexual assault allegation
May 18 (UPI) -- An unnamed British Parliament member accused of rape has been released on bail, Metropolitan Police confirmed Wednesday.

World News // 16 hours ago
At least 12 dead, several hurt after wall collapses at India salt factory
May 18 (UPI) -- A wall collapsed at a salt factory in western India on Wednesday, killing at least a dozen workers there and injuring several others, officials said.

World News // 18 hours ago
Russian soldier enters guilty plea in Ukrainian war crime trial
May 18 (UPI) -- A 21-year-old Russian soldier faces life in prison after he entered a guilty plea to killing an unarmed civilian during Russia's invasion of the country in the first war crimes trial of the war.

World News // 19 hours ago
U.N. global climate report shows severe impact on food security
May 18 (UPI) -- Climate change continued to heat up the Earth in 2021 as concentrations of greenhouse gases increased, sea ice mass shrank and ocean levels rose, according to a new report from the World Meteorological Organization.
Advertisement