Joe Biden ahead of Syrian peace talks: 'We are prepared to have a military solution'

The United States vice president also spoke against Turkey's treatment of political dissent during his visit to Istanbul Saturday.

Vice President Joe Biden, seen here at an unveiling ceremony of a marble bust of former Vice President Dick Cheney in December, is in Istanbul to prompt Turkey to tighten its Syrian border amid the neighboring country's ongoing civil war. He also met with local journalists to discuss the country's crackdown on freedom of speech. File Photo by Erin Schaff/UPI. | License Photo

During a speech following his meeting with Turkish Prime Minister Ahmet Davutoglu in Istanbul Saturday, Biden said the two agreed to "improve the support of local Sunni Arab forces" working to further secure the Syrian border in the aftermath of a recent terrorist attack in the city's tourist district.

"And so together we continue to work toward a political resolution of the situation in Syria. We are neither optimistic nor pessimistic," Biden said. "But we are prepared. We are prepared if that's not possible to make -- to have a military solution to this operation in taking out daesh."

Biden arrived in Istanbul Friday with his family to meet with Turkey's President Recep Tayyip Erdogan and Davutoglu to discuss the border as the United States and others continue to confront the Islamic State in the region.

The meetings come immediately after Biden publicly criticized Erdogan's administration's treatment of government critics, saying imprisonment and condemnation sets a poor example for how the rest of the region should behave toward freedom of expression.

Having arrived in Istanbul Friday, Biden commenced his visit by disapproving Erdogan's recent treatment of academics, political opposition and critical journalists who have expressed dissent.

"When the media are intimidated or imprisoned for critical reporting, when Internet freedom is curtailed and social media sites...shut down, when more than 1,000 academics are accused of treason simply by signing a petition, that's not the kind of example that needs to be set in the region," Biden said during a meeting with local journalists and civil representatives, according to the Washington Post.

Turkish officials have not yet publicly responded to Biden's comments on freedom of speech.

World News // 1 hour ago
German government takes 20% stake in $10B Lufthansa bailout
May 25 (UPI) -- Lufthansa Group announced Monday that the airline will receive a $10 billion bailout from Germany, giving the government a 20 precent stake in the company and two seats on the airline's board.

World News // 10 hours ago
Ex-comfort woman decries 'betrayal' in South Korea activist scandal
May 25 (UPI) -- The former South Korean comfort woman who accused an activist of misappropriating funds said Monday she had been "betrayed overnight" after being "used" by lawmaker-elect Yoon Mi-hyang for three decades. 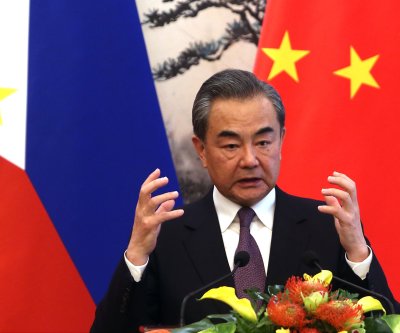