JALALABAD, Afghanistan, Jan. 13 (UPI) -- At least seven people were killed Wednesday in a suicide bombing followed by a gun battle near the Pakistani consulate in Jalalabad in eastern Afghanistan.

Ataullah Khogyani, spokesman for the governor of Nangarhar province, confirmed the bombing, saying it prompted a gun fight between security forces and surviving assailants. He earlier said at least four police officers were killed and several civilians injured.

The province, on the border with Pakistan, is the site of activity on the part of Islamic State and Taliban loyalist groups.

The bombing is part of a wave of violence in Afghan cities since the start of the new year, designed, some analysts say, to give the Taliban leverage in upcoming peace talks. Neither the Taliban nor any other group has claimed responsibility for the attack. It follows attacks on targets including a Kabul restaurant favored by expatriates, the Indian consulate in Balkh province, and the vacant home of a Pakistani diplomat in Jalalabad. 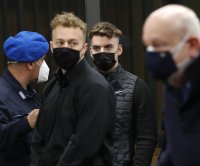 World News // 7 hours ago
Canada approves Pfizer vaccine for 12- to 15-year-olds
May 5 (UPI) -- Health Canada on Wednesday authorized the Pfizer-BioNTech coronavirus vaccine for children ages 12 to 15.

World News // 11 hours ago
Myanmar coup: Military bans satellite dishes in media crackdown
May 5 (UPI) -- More than three months after it took over the civilian government, Myanmar's military on Wednesday banned satellite dishes that it says were providing access to television programs that "harm state security."

World News // 12 hours ago
North Korea getting ready for COVID-19 vaccines after reporting 'zero' cases
May 5 (UPI) -- North Korea is preparing to receive deliveries of COVID-19 vaccines from the World Health Organization's COVAX facility amid delays, according to the WHO.

World News // 12 hours ago
India FM Jaishankar won't physically attend G7 due to COVID-19 risk
May 5 (UPI) -- India's top diplomat said Wednesday he's possibly been exposed to COVID-19 and will not physically attend the Group of 7 summit meetings in London, in the latest turn linked to a significant surge in cases in the nation.