Muslim family at Gatwick Airport blocked by U.S. from boarding flight to Disneyland 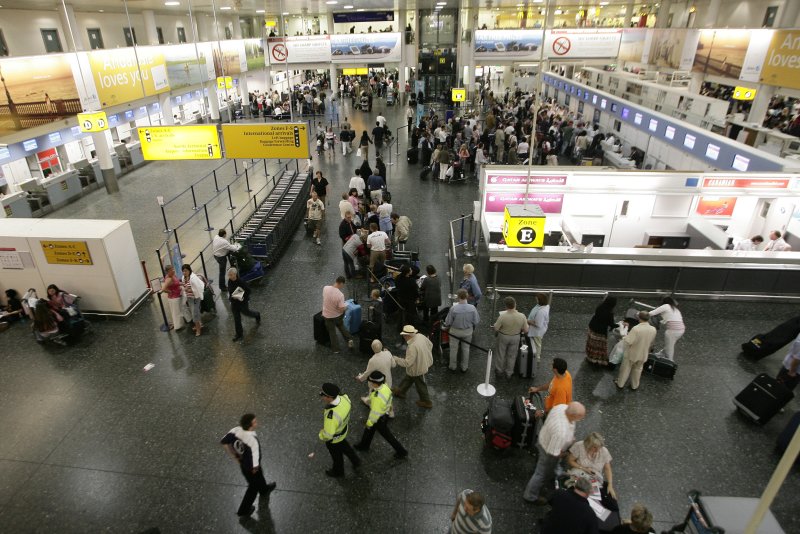 A British Muslim family of 11 heading to Disneyland was prevented from boarding a flight in London by U.S. officials amid concerns of rising U.S. Islamophobia. Domestic and international concern has grown as American anti-Muslim rhetoric seemingly increased following the San Bernardino massacre on Dec. 2, where 14 people were killed by a Muslim couple with extremist ideology. File photo by Hugo Philpott/UPI | License Photo

LONDON, Dec. 23 (UPI) -- A British Muslim family of 11 heading to Disneyland was prevented from boarding a flight in London by U.S. officials amid concerns of rising U.S. Islamophobia.

Mohammad Tariq Mahmood, his brother and nine of their children were previously granted authorization to travel from London's Gatwick Airport to Los Angeles on Dec. 15, The Guardian reported.

A member of Britain's Border Force prevented Mahmood and his family from entering the flight, citing a decision from Washington D.C. U.S. Department of Homeland Security. Officials have not yet provided an explanation as to why the family was prevented from boarding the plane while already at the departure lounge.

"It's because of the attacks on America -- they think every Muslim poses a threat," Mahmood said. "I have never been more embarrassed in my life. I work here, I have a business here. But we were alienated."

The family was escorted out of the airport after they were forced to return products purchased at Gatwick's duty-free stores. The airline told them they would not be refunded the $13,340 cost of their flights.

Domestic and international concern has grown as American anti-Muslim rhetoric seemingly increased following the San Bernardino, Calif., massacre on Dec. 2, where 14 people were killed by a Muslim couple with extremist ideology.

In response to the San Bernardino attack, Republican presidential front-runner Donald Trump suggested all Muslims should be temporarily barred from entering the United States. Trump's comments have received much criticism.

Mahmood said the children had been looking forward for the trip for months and were devastated they would not visit their cousins in the United States as planned. The family also planned to visit Universal Studios.

British Prime Minister David Cameron said he would respond to the issue.

British Labor Minister of Parliament Stella Creasy raised the incident as a concern, stating that lack of information by U.S. authorities is fueling resentment within British Muslim communities.

"Online and offline discussions reverberate with the growing fear U.K. Muslims are being 'trumped' -- that widespread condemnation of Donald Trump's call for no Muslim to be allowed into America contrasts with what is going on in practice," Creasy wrote for The Guardian.

She said she was in contact with at least one other constituent who had had a similar experience.

Mahmood told BBC News that his experience had been a clear case of discrimination.

"Because I have a beard and sometimes wear Islamic dress I get stopped and asked questions. I feel that is part of the deal of flying. I understand that," Mahmood said. "The fact that we were the only ones who were of Asian or Muslim appearance, it seemed embarrassing that only we were the only ones taken out of the queue. For the children to take this in is very difficult."

World News // 12 hours ago
Russian authorities arrest 5 in connection with deadly coal mine disaster
Nov. 27 (UPI) -- Authorities have arrested five people on charges related to negligence in a Russian coal mine disaster that left more than 50 people dead.