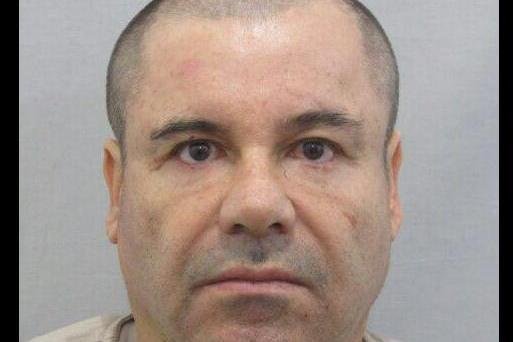 A Mexican musician revealed the identity of a man in a music video as his father because of shared similarities in appearance and circumstance to fugitive drug lord Joaquin "El Chapo" Guzman (pictured). Photo courtesy of Mexico's Attorney General

MEXICO CITY, Dec. 8 (UPI) -- A Mexican musician said a man mistaken for Joaquin "El Chapo" Guzman in his band's music video is not, in fact, the drug lord, but the singer's father, who happens to look like fugitive.

Los Titanes de Durango, a Mexican norteño music genre group, released a music video in late November titled "Ando Arremangando," roughly translating to "I'm rolling up sleeves." In the video, the five-person music group travels as part of the entourage of a character who appears to be a short, burly, drug boss with his sleeves rolled up and sporting a moustache -- similar in appearance to Guzman.

The men in the video celebrate their wealth with booze, cars, weapons and women. What appears to be marijuana wrapped in plastic is also seen in the video -- circumstances similar to a lifestyle someone may assume a drug lord would have. A Mexican brass band also makes an appearance.

A rough video taken with a cell phone was released online. Although some believed the low-quality, more-than-a-minute-long clip was truly of Guzman, it was in fact just a recording of the recording of the music video.

The similarities raised the concerns of former Drug Enforcement Agency agent Mike Vigil before the origin of the video was revealed.

"Based on several factors, there is a very strong possibility -- I would say 90 to 95 percent -- that it's [Guzman] in the video," Vigil told MySanAntonio. "I don't know who else it could be.

"It certainly looks like him," Vigil added. "Everyone is at his beck and call. He's right in the middle of the party, almost guest of honor... We know he travels with a large entourage of armed guards."

The similarities to Guzman were by design, Sergio Sanchez Ayon, the group's lead singer, told Univision, also revealing the man in the video was his father.

"We wanted a character that looked like 'El Chapo,'" Sanchez Ayon said. "We interviewed actors. But it turns out my dad is short, we put the baseball cap on and put him in the video. We didn't mean to cause a problem."

El Chapo" -- meaning "The Short One" or "shorty" -- so dubbed because of his 5-foot-6-inch frame, was captured in Guatemala in 1993 and then extradited to Mexico to face murder and drug trafficking charges. He escaped from prison in 2001 by hiding in a laundry cart after bribing prison guards, and was re-captured in February 2014.