More than 20 people were killed in Kunduz, Afghanistan, in an Oct. 3 airstrike that targeted a hospital operated by the humanitarian group Doctors Without Borders. Tuesday, military officials told news media that an investigation has concluded that the crew of an AC-130 (pictured) mistook the hospital for a Taliban compound. Photo by U.S. Air Force/Sr. Airman Julianne Showalter

WASHINGTON, Nov. 24 (UPI) -- The U.S. military targeted an Afghanistan hospital in an airstrike last month because it mistook the building for a Taliban site from which fighters were firing at forces on the ground, officials said Tuesday.

The Oct. 3 airstrike in Kunduz, Afghanistan, killed between 20 and 30 people, including humanitarian personnel of the medical group Doctors Without Borders, which staffed the hospital. The strike has since been criticized by the humanitarian group and several foreign officials and prompted a U.S. investigation.

Tuesday, CNN cited administration officials as saying the incident was the result of mistaken identity -- led by technical and human error.

The officials' revelations came a day before Gen. John Campbell, the top NATO and U.S. commander in Afghanistan, was set to give a brief summary of the investigation -- even though the military still must determine if any disciplinary or punitive actions will be taken.

CNN's report said the AC-130 aircraft involved in the 2 a.m. strike was supposed to target the nearby Taliban compound but fired on the hospital by mistake.

Doctors Without Borders, U.S. officials have previously said, took every step necessary to communicate the hospital's location to military commanders and bears no responsibility for the accident.

According to the officials, the gunship was given incorrect coordinates that led it to an empty field. The crew of the plane then decided a nearby building, the hospital, must be the target site.

Another unanswered question is why the plane's crew, who were responding to a call for help from Afghan fighters who said they were under Taliban fire, targeted the hospital when it was clear there was no fighting there. The AC-130 has infrared equipment aboard that can detect gunfire on the ground.

"A combination of human and technical errors led to this disastrous strike," one military officer said.

Doctors Without Borders, which believes the errant airstrike was a war crime, has asked for an independent investigation into the bombing.

World News // 1 hour ago
North Korea accuses South of twisting facts about Korean War
Oct. 30 (UPI) -- North Korea is blasting Seoul following statements about the 1950-53 Korean War that began with the North's invasion of the South.

World News // 2 hours ago
China criticizes U.S. following Mike Pompeo's Xinjiang remarks
Oct. 30 (UPI) -- China defended its policy toward its Muslim Uighur minority in Xinjiang in response to remarks from U.S. Secretary of State Mike Pompeo, who had urged Indonesians to stand up to China's abuse of its Muslim population.

World News // 17 hours ago
140 dead after migrant shipwreck near Senegal
Oct. 29 (UPI) -- At least 140 people drowned after a vessel carrying migrants to Europe capsized off the coast of Senegal, the United Nations' International Organization for Migration said Thursday.

World News // 22 hours ago
Future pandemics will be worse without major strategy shift, study says
Oct. 29 (UPI) -- International experts in a new scientific study warned on Thursday that pandemics like COVID-19 will emerge more often in the future unless more targeted efforts are made to control them. 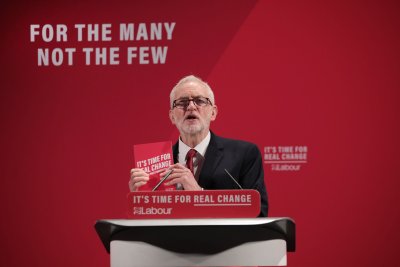