The first blast occurred in front of a university as students left for the day.

At least six people were killed in two blasts in Kabul, Afghanistan, on Nov. 24, 2015, while ongoing clashes between the Taliban and Afghan security forces erupted the day prior in Kunduz province, to the north. UPI | License Photo

KABUL, Afghanistan, Nov. 24 (UPI) -- At least six civilians were killed Tuesday in two separate explosions in the capital of Afghanistan, while fighting erupted between security forces and the Taliban in Kunduz province.

The first blast killed three civilians in front of the Kabul Education University as students left for the day, Xinhua news agency quoted an interior ministry spokesman as saying.

Meanwhile, at least 12 Taliban fighters were killed during an ongoing clash with security forces that erupted in Kunduz province Monday night, district governor Nasrudin Saadi told Xinhua. Eight militants were injured, and there were no reported casualties among security personnel.

Afghanistan's Ministry of Interior Affairs on Tuesday said security forces killed 10 armed insurgents and injured another seven during the past 24 hours of operations across the country, including in Kunduz province.

Since NATO passed the combat mission onto Afghan security forces last year, the Taliban have increased attacks against Afghan police and soldiers but have been unable to hold onto various districts, villages and cities captured throughout 2015.

Taliban militants seized the city of Kunduz in late September -- considered by many the most significant urban victory for the group since its fall from power in 2001 -- but Afghan security forces recaptured the city last month with help from U.S. airstrikes.

A government-appointed probe last week blamed the battle on "illegal political interference particularly by parliamentarians in the official matters, institutional disorder, corruption, judicial weaknesses, ghost police and security forces and failure of the Afghan government to reign in thousands of illegal armed men."

Zulmay Khalilzad, the former U.S. ambassador to Afghanistan, on Tuesday told Afghan media the security situation in Afghanistan has deteriorated since last year and that "the country would fail to grapple with these challenges" if support from the United States waned. 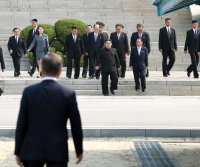