People rally at one of Paris' main squares in a display of solidarity after the terrorist attack at Charlie Hebdo weekly newspaper in Paris on Jan. 7. File Photo by Eco Clement/UPI | License Photo

PARIS, Nov. 13 (UPI) -- For the third time this year, Paris has become a target for deadly terrorist attacks.

While no group had claimed responsibility late Friday for shootings and explosions that killed more than 100 people at several locations around the famous city, officials believed it was an elaborately coordinated plan.

The massacre comes less than three months after a planned attack on a French commuter train on Aug. 21 that was foiled by two American servicemen and a friend who happened to be onboard.

Twenty-five-year-old Ayoub El-Khazzani of Morocco, who wielded an AK-47 on the train, was charged with terrorism in the case. Born in Tetouan, Morocco, El-Khazzani moved to Spain in 2007 and then to Belgium earlier this year. In February 2014, Spanish authorities had warned France that El-Khazzani was an Islamist extremist who could travel to France.

He was carrying 270 bullets and a bottle of gasoline on the train, which was carrying 500 passengers from Amsterdam to Paris, and had watched a militant Islamist video shortly before launching the attack attempt, French prosecutors said.

Four days later, French President Francois Hollande said of the incident, "It is further proof that we must prepare for other attacks, and therefore protect ourselves."

France had increased security in the wake of January shootings at on the Charlie Hebdo satirical magazine and a Jewish supermarket in Paris that killed 17. Al-Qaida in the Arabian Peninsula claimed responsibility for that attack.

Brothers Said and Cherif Kouachi, who launched the assault on the magazine, died in a standoff with police two days into a manhunt.

AQAP was responding to the magazine's publication of cartoons depicting the Prophet Mohammed, but in a video after the attack elocuted broader offenses:

With its population of more than 5 million Muslims, France has become a recruiting ground for violent Islamist networks, the Economist reported earlier this year, supplying more of its people to fight with jihadists in Iraq and Syria than any other European country.

The French government has strengthened counterterrorism laws and is working on a defense budget that would spend more to fight terrorism. In April, France dispatched 7,000 soldiers to protect sensitive locations.

World News // 4 hours ago
France says it will defend Sweden, Finland against attacks as they seek NATO membership
May 16 (UPI) -- France will defend Sweden and Finland, Elysee said Monday, as the two Nordic countries have received threats from Russia over their decisions to join the NATO defensive military alliance. 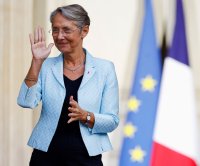 World News // 22 hours ago
Zelensky addresses U.S. universities on rebuilding higher ed, bringing back students
May 16 (UPI) -- Ukrainian President Volodymyr Zelensky told students, professors and university officials Monday that they have a choice to take an active role in current conflict in his country against Russia or they can be bystanders.

World News // 17 hours ago
Ukraine makes gains in Kharkiv against Russia with counterattack
May 16 (UPI) -- Ukrainian forces said Monday their counteroffensive in the second-largest city of Kharkiv has allowed them to push back Russian forces in one of the most significant setbacks for Moscow since the start of its invasion. 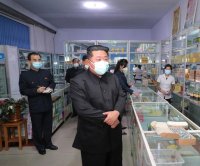