In addition to pressure, humanitarian aid to North Korea should be provided in a way that can be monitored by outside observers, ambassador Robert King said. 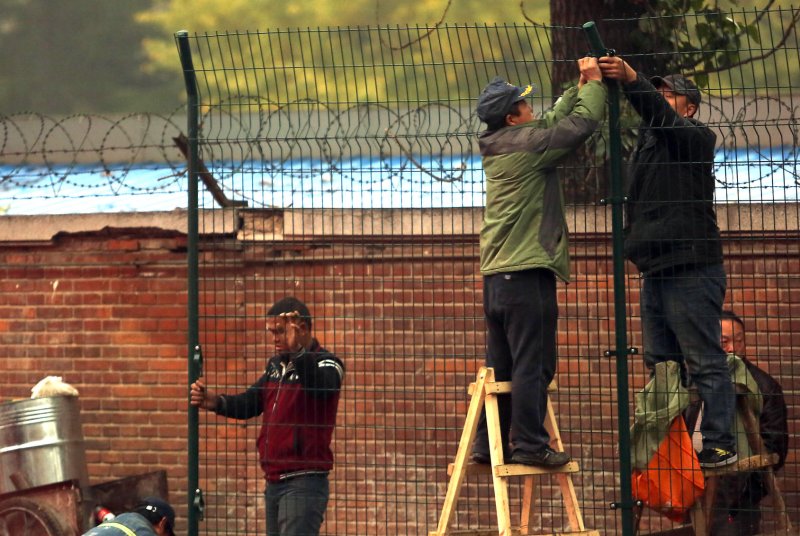 Chinese workers erect a new perimeter fence around North Korea's embassy in Beijing on Wednesday. A U.S. envoy said pressure on North Korea must continue to be applied in order to address the country's human rights violations. Photo by Stephen Shaver/UPI | License Photo

Speaking at the Seoul Human Rights conference on Wednesday, ambassador Robert King said, "What we've got to do in terms of dealing with the problems of human rights in North Korea is to look at this as a long, tough fight. I think we need continued pressure."

King said the United States and others have pressured North Korea in various ways, and so far, the strategy has been working. Yonhap reported the U.S. official said Pyongyang is feeling the heat from the international community and a vote is to take place at the United Nations General Assembly in December on a North Korea human rights resolution.

Placing pressure on North Korea to change, however, is just one of many tasks for concerned governments, King said. Humanitarian aid should be provided in a way that can be monitored by outside observers, and in a way that assistance is properly channeled to the most vulnerable segment of the North Korean population.

King's remarks come at a time when the U.N. General Assembly's Third Committee is expected to address the North Korea human rights resolution.

Voice of America reported Wednesday more members of the General Assembly are supporting the resolution, since debates on Pyongyang's rights violations began to be discussed in 2005.

Sylvie Lucas, Luxembourg's ambassador to the United Nations, said during the most recent meeting of the Third Committee that there is a largely shared concern regarding "the serious and systematic human rights violations" in North Korea.

World News // 12 hours ago
Anti-oil protesters glue selves to 'Last Supper' painting at Royal Academy
July 5 (UPI) -- For the second day in a row a group of climate activists glued themselves to a painting at a London art museum Tuesday to protest oil and gas extraction.

World News // 12 hours ago
Hacker allegedly selling data of 1 billion people stolen from Shanghai police
July 5 (UPI) -- An anonymous hacker is selling what appears to be a massive trove of data pilfered from the Shanghai police that could include personal information from 1 billion Chinese nationals, according to reports.

World News // 13 hours ago
Germany fears for gas supply as Russia to shut down Nord Stream pipeline
July 5 (UPI) -- Russia is planning to shut down the Nord Stream 1 pipeline next week for annual maintenance, stoking fears in Germany that gas supplies could be severely impacted.

World News // 15 hours ago
Yum! Brands close to Russian exit with KFC sale almost complete
July 5 (UPI) -- Yum! Brands announced it is close to finalizing the sale of its Russian KFC franchises to a local operator. The KFC and earlier Pizza Hut sales would complete Yum's exit from Russia since its February invasion of Ukraine
Advertisement